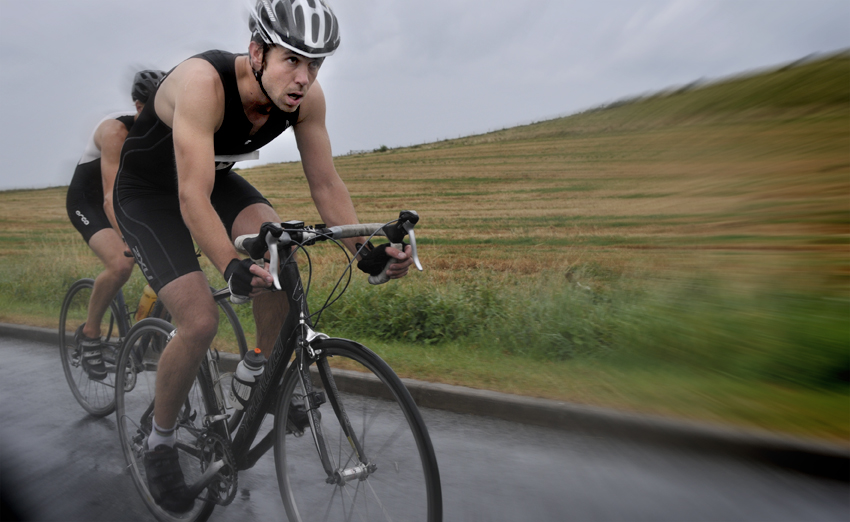 6.30 am, its still dark and the day does not look promising. Â  Leaden skies hang low over the sea front and Joe and I have got lost in Brighton’s oneway systems. Â  Â The marina, venue for this years triathlon, is further out of town than we thought.Â  With just minutes to go before the off, we’re hustling through another 130 wet suit clad athletes in a rain soaked Asda car park, just in time for a briefing by the guy who claims to be in charge.

Despite the weather, the crowd is good natured and responds heartily to the head honchoâ€™s attempts to liven them up with a few jokes about the Olympic spirit still dripping over us, a bit like the rain.Â Â  I didnâ€™t get it but then I didnâ€™t yet understand what drives people to get up so early and dive in the sea.Â Â Â  Neither did I quite understand the level of organization needed to put on an event like this.Â Â Â  Nor it seems did the folk supposed to be doing the organizing.Â Â Â  Start time, the starting line and the starting signal had clearly been predetermined â€“ like â€˜ go jump off that there harbour wallâ€™, but nobody seems to sure of where the finish might be.

So off they go, 200 flailing arms churning up the less than appealing waters of the marina (I notice more than one dead sea bird bobbing about on its oily surface).Â Â Â  By the time the field returns to the pontoons, Joe has forged through the pack and is in the lead bunch.Â Â  Iâ€™m gobsmacked â€“ I knew he was fit but really, that fit?Â Â Â  We have some seriously sporty alpha males here and Joeâ€™s up with the best of them.Â Â Â  This event was turning out to be more of a heart thumper than Iâ€™d expected.Â Â  Instead of sloping off for coffees at Macdonalds while the lads head out over the downs (downs in Sussex are really ups) on their bikes, John (a friend of Joeâ€™s who has also braved the weather to support the goodness of this cause) and I jump into his car and follow the riders as they start the climb on the first of two laps of a 20 km circuit.

We are now TEAM JOE/TCF!Â Â  Leaning out of the side window I take a few photos and scream encouragement.Â  John as driver does a good job in helping to pace our boy.Â Â Â Â  Not that he needs our help; Joe has found two other riders to â€˜draftâ€™ with and they are slowly making their way through the field.Â Â Â  The conditions are far from ideal, the rain continues to slant in from the English Channel, the roads are greasy and on the way down Wilson Avenue (40 mph) we notice blue lights flashing at the bottom of the hill ahead.Â Â  It looks bad, one crumpled bike and a gurney being lifted into the ambulance.Â Â Â Â  We decide to stay with Joe as he gets up on the pedals for the start of lap two â€“ this is a safety concern now, as much as support and encouragement.Â Â  Joe manages to stay upright but, as he told me later, he had some serious wheel spin on the steeper gradients and his only worry was that having only the â€˜team carâ€™ with him might have given him a slight advantage â€¦ shiiiiiiiiit â€¦ we were having fun.Â Â Â Â  John and I take a short cut and weâ€™re back at â€˜transitionâ€™ in time to see the first of the riders enter the car park.

Way out in front is an obvious pro â€“ all sinew and muscle and the skimpiest of shorts.Â Â  Itâ€™s a long agonizing wait and eight more ridersÂ  before Joe slides into the transition area.Â Â Â  However good you are as a swimmer or cyclist you have to get your transition right and thatâ€™s a skill in itself.Â Â Â  And Joe is fumbling and fumbling and â€¦ fumbling with his shoe laces.Â Â Â  In changing from his bike shoes to his track shoes, heâ€™s losing precious moments in what has been an incredible performance so far â€“ we hadnâ€™t counted for how cold and numb his fingers would be.Â Â Â  Please please donâ€™t blow it now.Â Â Â Â  Thereâ€™s no-one looking and Iâ€™m about to duck under the wire and give him a hand.Â Â Â Â  Luckily, any moral scruples I might have about assisting a competitor, are not put to the test.Â Â  At last heâ€™s away and charging along the â€˜undercliffâ€™ (it actually is under the cliff, not over it ) he disappears into the mist.Â Â Â  This is the really tough bit â€“ only 8 kâ€™s but its lonely out there and by now the field is well spread out.Â Â Â Â  Itâ€™ll be over half an hour before he returns so John and I take it upon ourselves to check exactly where that finish line is.Â Â Â  There are a few yellow jackets about none seem to be too sure â€¦ over there? Nah over there.Â Â  We follow a guy with a some kind of electronic clipboard and it turns weâ€™ve made the right call.Â Â Â Â  Thereâ€™s this high wire fence and a gate that leads to a small construction site with lots of Danger Keep Out signs â€¦ this the finish line and few moments later Mr Tight Shorts whizzes past to thunderous â€¦.. well not quite applause, more like a quiet ripple of appreciation from those in the know, which I assure you is not many.Â Â Â Â  Again a long, long wait.Â Â Â  No 2 comes in, number 3, 4 & 5.Â Â  And there he is – our Joe has made up two more places and he strides in with a personal best of 1 hour 48 minutes.

We both had a brilliant day.Â Â Â Â  Why?Â Â  For me, I was well proud of Joe.Â  Heâ€™d trained hard, committed to the
cause, and raised over Â£1000 for The Compassionate Friends, a charity we’d never have got involved with had it not been for our Josh.Â Â Â Â  For Joe though itâ€™s as much about honouring his brother as anything else.Â Â Â  Since staring at Fight for Peace, Joe has learnt more about what it means not to give up.Â Â Â  You can always put in a little bit more effort, go better than your best.Â Â Â Â And Josh is always with him as a reminder that there are still great rewards to be had in life, even though we miss him so. 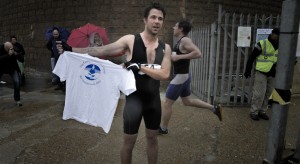 If you haven’t already done so, there’s still time to make a donation to the TCF – its easy peasy – click on Joe’s JUST GIVING page and hit the donate button. Â  Â  Â But so many thanks to all those who have given so generously – the total to date is a massive Â£1131.00

And for the complete photo story of Joe’s Tri, feast your eyes on our GALLERY PAGE