FILM: ‘This is Purgatory’

‘This is Purgatory’ is a film that Josh’s Dad, Jimmy made some years before Josh died. Â He was asked to make it as part of an arts project in Stroud in which 24 artists were invited to respond to randomly selected local map references. Jimmy’s reference was a small wood strangely called Purgatory. Nobody seemed to know why. But what started out as an attempt to find out the origins of the name quickly became a series of quirky character studies and a reflection on life now and the life hereafter.

Jimmy says “It does feel slightly odd watching this film now, given that its core question is what happens when we die. Â  Â Its fairly lighthearted take on the life hereafter I not sure that I could make it now. That said I’m still very proud of the film. It was fun to make and it still raises a smile”.

For some light relief and an insight into some of the more curious aspects of living with the inevitable near Stroud, we urge you to take a look – you might even recognize James Showers, our local undertaker, who helped us when Josh died…. and there’s a wonderful cameo performance from Jimmy’s mum Emily. 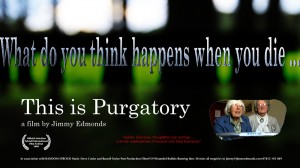