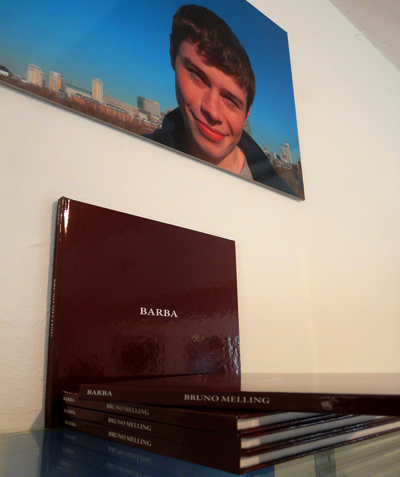 We did not know Bruno. Â  Â His mum, Gillian, is a friend of a friend and it was only because Josh’s sister Rosa was staying with them at the time that we got to hear that Bruno had died. Â

In June 2011 Bruno and three friends left for a six week holiday in south east Asia. But only four days into their journey Bruno and two of his friends, Max and Conrad were killed in a bus crash. Their other friend survived unscathed.Â  Â This was a terrible and totally avoidable tragedy. Â  Â  Like Josh, Â three young men died needlessly as they set out to explore the world. Â  Â And it is with sad coincidence that we have now become good friends with their grieving families. Â

Bruno was full of youth, full of passion and full of a talent just waiting to explode. Â  All these are so sadly gone but Â earlier this yearÂ we were honoured to be able to attend the opening night of a retrospective of Bruno’s photography work on London’s South Bank. Â  Â Two years after his death, Bruno’s mum Gillian and his brother and sister, William and Bella decided to mount an exhibition of BARBA, a project Bruno had completed but had not yet published. Â  Â Putting on the show was as much an important part of the family’s response to their loss as it is a window on Bruno’s view of the world of London’s traditional barbers.Â Â

And Bruno’s skills as a photographer were remarkable. Â  Â Only 19 and he already had a superb appreciation for detail, for colour and for subject matter. Â  Â  As you look through his work, I think you can see that he already had an intuitive feel for the emotional economy that is so central to ‘good’ photographs. Â  At such a young age, he already knew how to use the power of simple realities to tell a wider story. Â  Â  Â His family are now finding their way to remember and tell his story.

Gillian has written her account of BARBA especially for usÂ 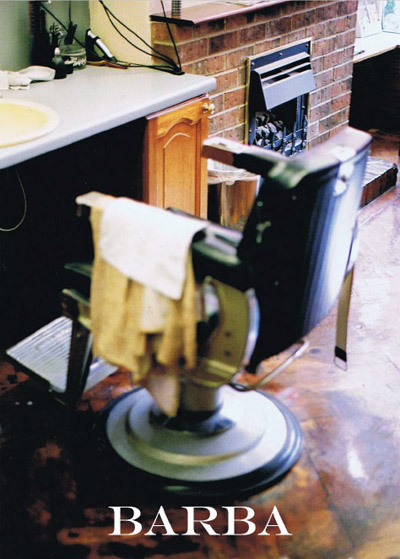 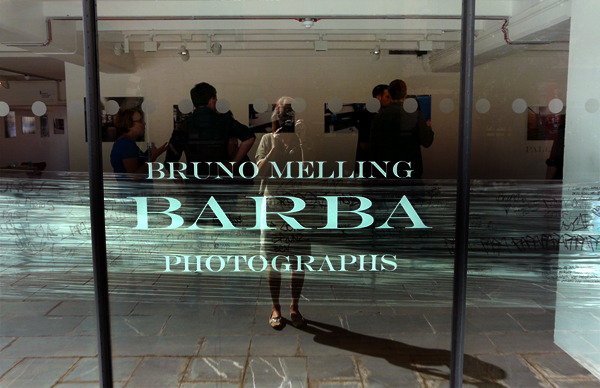 Barba is Italian for barber.

In 2010/11 my son Bruno was a Photography foundation student at the London College of Communication, one of London’s most prestigious art colleges. He became fascinated by the quiet and intimate world of Italian barber shops in London and decided to document them in photographs. He asked each barber their permission to photograph the interiors of their shops. Â  Eight agreed.

Bruno recorded the atmosphere, colours, unique dÃ©cor, and personal collections of each barber shop interior. He experimented with focus and emphasis, composition, colour and texture with freedom and curiosity and brought the images together in the form of Â a book, BARBA. He worked carefully on the design, sensitively integrating the images and titles and colours. The book is both understated and striking.

All the barbers are Italian with one exception, Mr.Briggs, who is Greek. Â  He has the smallest barber shop in London, hidden behind the aristocratic shirt shops of Jermyn StreetÂ and decorated with beautiful icons. Â  Â  Â Courteous and grave, the barber is 82 years old and has cut hair in this tiny shop since 1959. Â  Â But he has no thoughts of retirement: ‘people ask if I am ever bored,’ he says. ‘But I tell them, every head of hair is different.’ 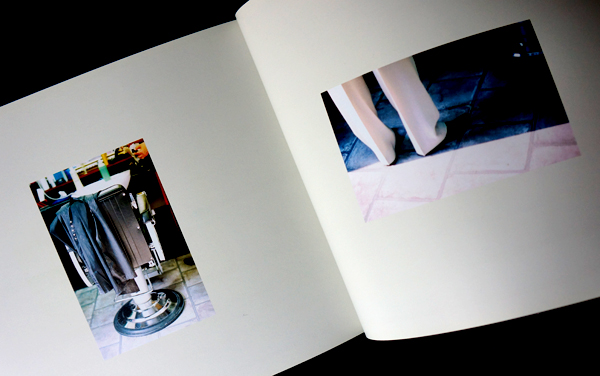 Bruno produced and exhibited his Barba book for the Foundation show at the college in April 2011 along with one large framed photograph of Gino’s, a classic italian barber with a long Soho history. Â Â Â Â It was on the strength of this work that in May Bruno Â heard he had been accepted at Glasgow School of Art for a four year Photography Degree in September 2011.

Some months after Bruno was killed I had a few copies of the book made and I took a copy to each of the barbers as a thank you. Â Bruno had intended to give them each a photograph.Â Â The barbers remembered Bruno and were very shocked and saddened. 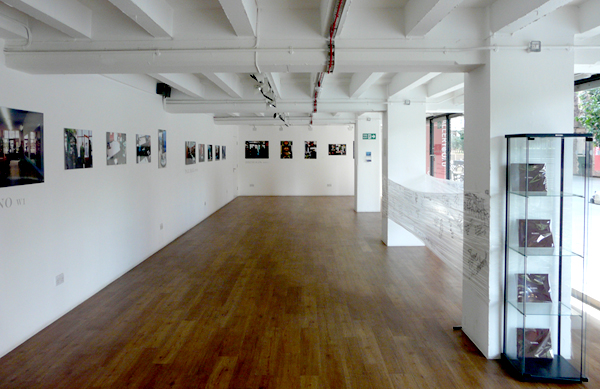 As much as we wanted people to see Bruno’s work,Â we wanted the Barba exhibition to be something he would be proud of. Â  Â We wanted it to be a beautiful and professional exhibition and luckily Â The Oxo Gallery became available. Â  It is right on the Thames, right near our home, and right where Bruno grew up and lived his life. Â It is a modern, airy space and a perfect compliment to Bruno’s work. Â  Â  Â People have asked if we were anxious about exhibiting his workÂ we werenâ€™t nervous. Â  Â  I wouldn’t say we were nervous about how people would react, but we were nervous that we would not be able to exhibit the work well. Â  The only sad part was that we only had the gallery for four days.

We exhibited every photograph in the Barba book whichÂ Bruno had very sweetly dedicatedÂ to his younger brother William (William was always very reluctant to have his hair cut). Â Â Â This dedication is incredibly poignant to us now and it wasÂ William helped me prepare hang the exhibition. Â  HeÂ sorted outÂ allÂ the technicalities of printing, dpiâ€™s etc, sizes and orderingâ€¦.a mammoth task for 40 photographs andÂ without his calmness and constant support it absolutely would not have happened. Â Bruno’s older sister,Â Bella, and his girlfriend Saffia both helped out Â with all the work of putting on a major show in Central London, invigilating with us every day and being on hand to explain the exhibition to visitors and to tell Bruno’s story. 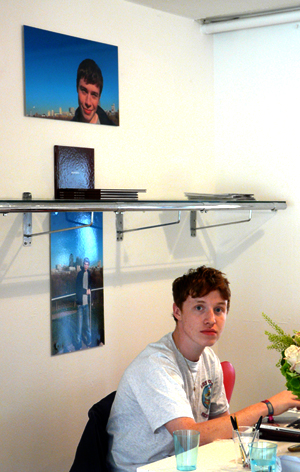 The opening night was lovely, many family and friends came and we were so proud to see his beautiful photographs filling the gallery with colour and warmth. Â  Josh’s family, Jimmy, Jane and Rosa came early and stayed all evening. Â  Â Jimmy gave a very moving and sensitive speech about Bruâ€™s work, and I am so very grateful for that. 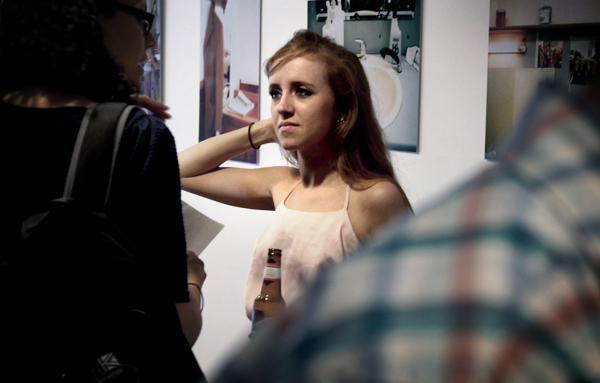 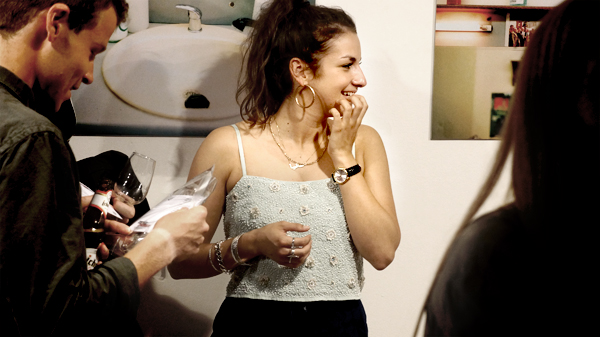 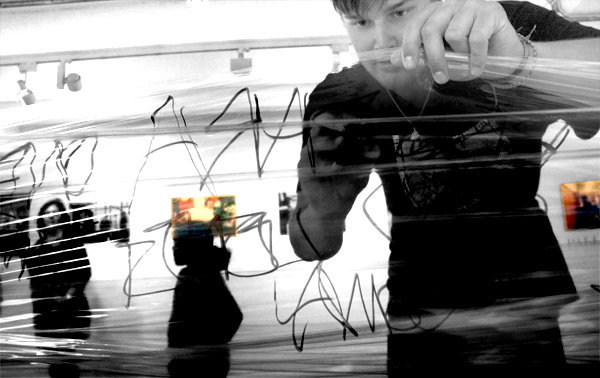 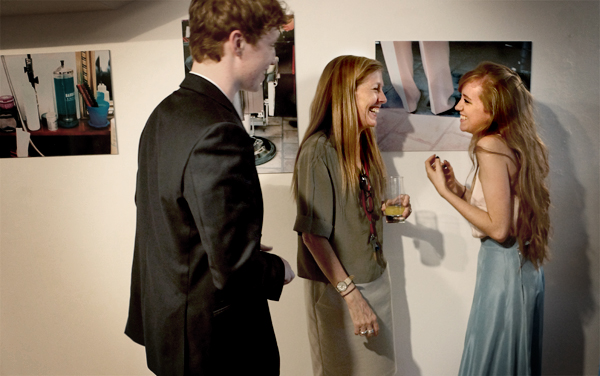 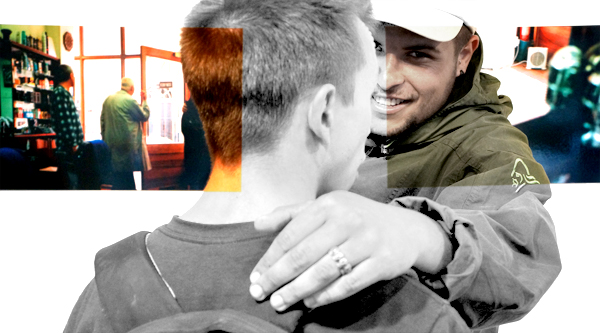 Exhibiting of Brunoâ€™s work is our Â way of honouring him and being close to him. It is about him being here and around us. It is about appreciating his vision as a young artist and that people who never knew him can see his unique photography. Â  Â In this way we can let Â Bruno know he is with us always and that we love him and hug him forever.

Jimmy adds: Â  Â For a 19 year old Bruno left an incredible body of work. Â But he was as a very modest person and few had seen his photographs. Â  ButÂ I found this review of BARBA on LondonCalling.com . Â Â Â Here’s a summary:

The image of the barber shop is changing. Once a male-only place for in-depth conversations, barbers woreÂ pressed trousers and shined boots. Now the scene includesÂ jeans and tattoos and female barbers. Bruno Mellings exhibition ofÂ 40 attentively photographed images portray the diminishing and contrasting world of the classic barber shop.Â However, despite all the change, the furnishings, products and decor remain the same, provoking the thought: are barbers still a significant part of a manâ€™s social life, or has that idea also been replaced?Â  Â Mellingâ€™s images are a must-see for lovers of photography and London culture. Â They prompt you, just for a moment, to appreciate the history behind the traditional barber shop, particularly in a city where so many are closing down.

His SE1 Landscapes, Elephant & Castle Interiors, Smoking Portraits, The Alyesbury Estate, The Maxwell Portraits as well as his Barba book all give testament to a talent that should have had a wonderful future, but was erased far to soon 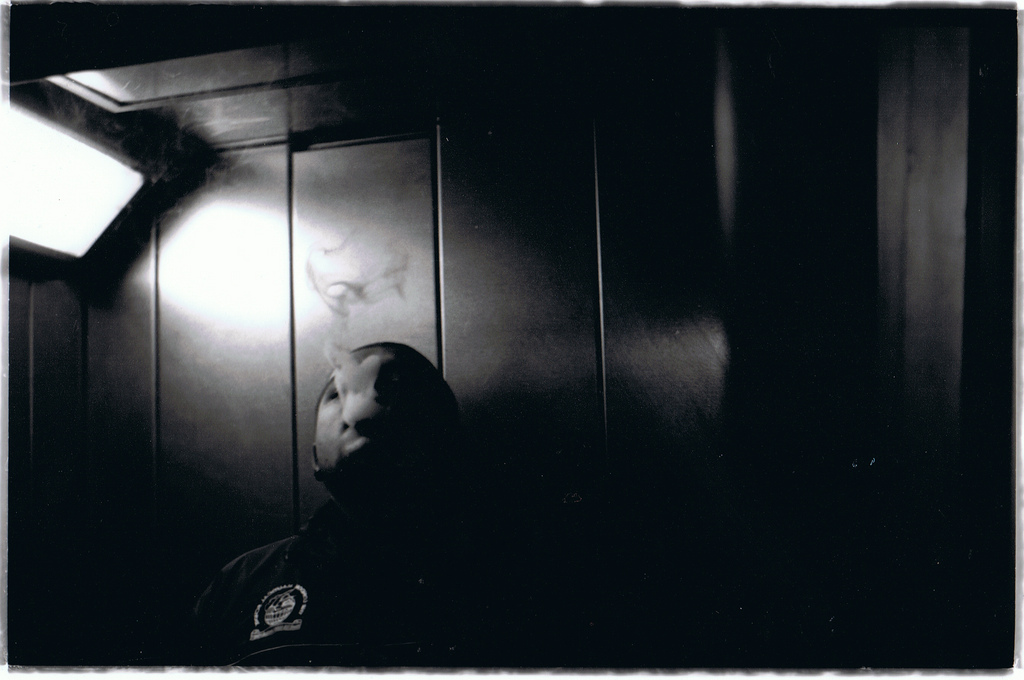 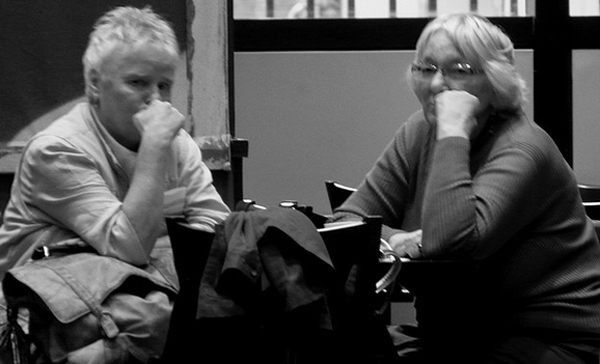 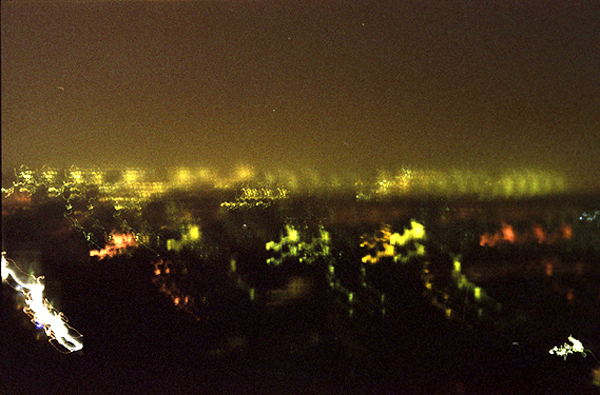 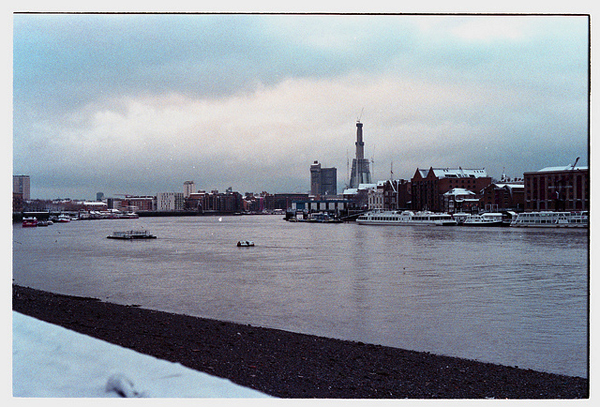 In the year before his death Bruno had started a project, taking images of Â the construction of what would become the highest building on London’s skyline. Â  He had decided that once a week he would stand atÂ a specific spot near our house inÂ Waterloo andÂ photograph The Shard as it grew taller and taller. Â  Bruno thenÂ Â asked Gillian if she would continue this while he was awayâ€¦.saying â€œjust leave the camera on automatic itâ€™ll be okâ€. Â  Â  The Shard was barely half way up when Bruno was killed only four days after he left for Thailand. Â  Â Gillian Â canâ€™t remember when she began but has taken a photo e very week of the Shard gradually going up, right up until the day it was finally completed. Â  Â She hope one day soon to put them all together in a new book.

Gillian told us she Â has also been photographing his tags (his graffiti name). Â  Â “There are tons of them hidden in corners, on the walls behind pictures, under tables and objects, inside books, all over the house!â€¦.every time I find one it is a lovely hallo from Bru.”

As a painter Gillian is starting to paint images of and for Bruno. Â She says it’s her way of being close to him, loving and cherishing him. Â “Creating things and special times and moments for and about a deceased child and sibling is sometimes what people do to stay close and protect and honour their loved oneâ€™s life.Â  We in turn need them with us always in this new emptierÂ  world.”

Bruno’s sister, Bella has recently had a tattoo of his tag engraved on her finger (“… bruno wouldÂ  most definitely approve”) and William, who finished drama schoolÂ this year, has written a song with piano accompaniment Â for Bruno. Â In the last two yearsÂ he has also made threeÂ  short Â films for his brother.

We’d like to thank Gillian, Bella and William for sharing Bruno’s photography with us – we look forward to seeing further creations made in Bruno’s name.
Â 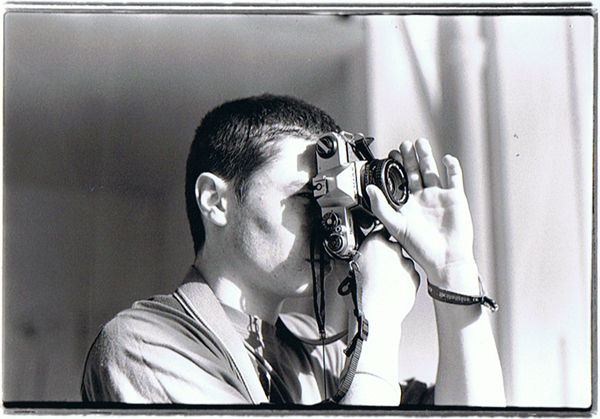