I’m not going to say anything about this beautiful film – just watch and you’ll get the point. We are so pleased that Josh did not die from hate, or violence, in war or from torture or brutality, from pride or hunger, from zealotry or self loathing. I think he would have loved this!

Here’s the link to the original site http://www.takepart.com/article/2012/12/02/weaponry-symphony-artist-makes-music-confiscated-guns?cmpid=tp-ptnr-upworthy

Rosa has just sent us this beautiful picture. Â  She’s in Candregarh in India at the wedding of one of her best friends brother. Â  Â  A mehndi or henna tattoo is typically applied the day before a wedding. Â  Its a common custom throughout the subcontinent and across all religions, Hindu, Muslim and Sikh. 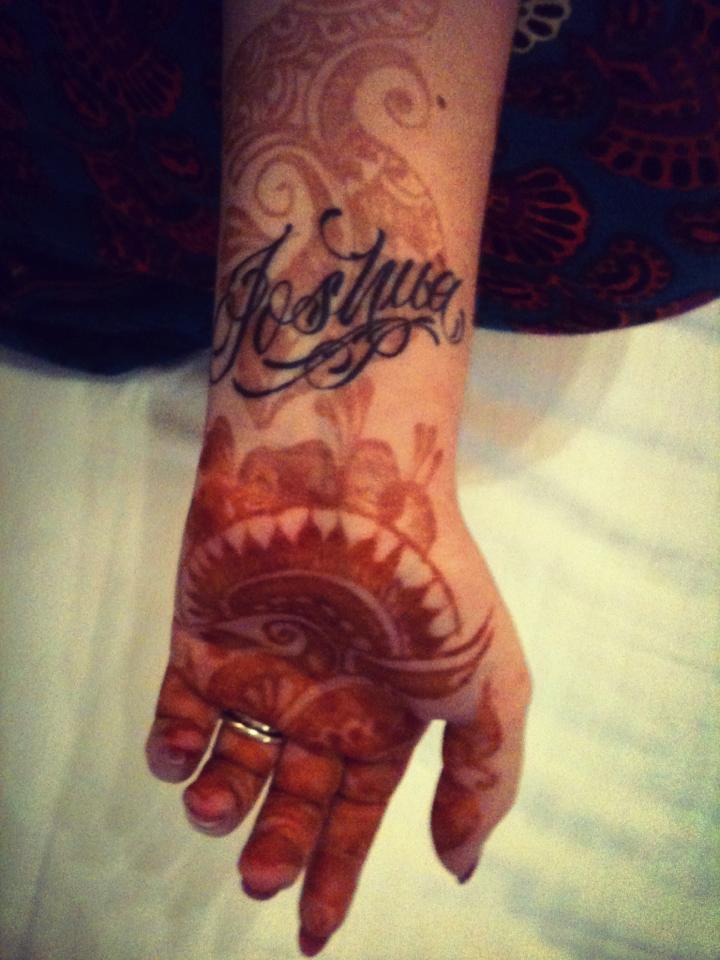 How do you spell blogosphere? Â  We’ve not really been there before but now that a number of blogs have been spreading news about BEYOND GOODBYE, I guess its time we took a look.

First off, this lovely woman from across the border in Scotland added an item

about the film on her site – see it hereÂ final fling. Â  Final Fling is a great site started by one Barbara Chalmers who has dashing white hair and wears bright red lipstick. Â  Â From what I can gather she’s an artist, a life coach, an independent celebrant and plays in a samba band. How she finds time to put this site together is beyond belief but its full of masses of information about what to do to prepare for a good death and a good funeral. Â  Â  Nice site Barbara – and thanks for spreading the word about our film.

You’ll also find Beyond Goodbye on the front page of the Natural Death Centre’s website . Here they’ve used it as an example of what is a good funeral.

The Natural Death Centre is the main resource in this country for independent funeral advice. Â They see their role as “playing a central part in demystifying the traditional funeral, encouraging thousands of families in having the kind of funerals they wanted, and helping create opportunity for new rituals to emerge.”

Earlier in the year the film had been featured on Seven Ponds, a website on the west coast of USA – see here for some of the comments. Â  Â  Seven Ponds also blogged about Rosa’s show In Absentia. Â  Â  Â Suzette Sherman, founder of Seven Ponds says in her introduction, “We see a world where everyone can experience death in their own personal way and feel it’s all okay”. Â  Â Everyone’s death is unique and everyone will experience grief differently. Â  Seven Ponds is a fantastic resource for helping people to embrace end of life with real love and compassion. Â

As well as being environmental friendly, with advice about planning a home funeralÂ (home births why not home funerals?)Â the site also has masses of examples of the ways people have responded to death and dying in art and creativity.

Dying Matters is part of the National Council for Palliative Care with a missionÂ â€œto support changing knowledge, attitudes and behaviours towards death, dying and bereavement, and through this to make â€˜living and dying wellâ€™ the norm”. Â  Â  Â Its actually a coalition of various organisations across the NHS, voluntary health and care sectors, trade unions, the funeral industry and more. Â  Â  Â It’s website recently featured our contribution to their Day of the Dead conference. Â  We had showed our film at the event and Â Jane’s had spoken about bereaved parents being peoples worst nightmare. Â  Â The article Turning grief into positive action quotes herÂ â€œour aim is to share our grief in a positive way, both for people who know us and those who don’t. We hope that in our death-averse culture, by bringing our experience into the public domain it will encourage others to open up more about an area so shrouded in silence….Â Our aim was, and still is, to celebrate Josh’s life as well as mourn his death.â€

Another American site (they seem to talk about death a little easier across the pond) had also blogged about our film soon after it was finished. The Daily Undertaker’s editor Patrick McNally reproduced an interview with both of us and you can read that here Beyond Goodbye: A Conversation with Jimmy Edmonds and Jane Harris. Bit of a surprise though when we found put that we’d been tweeted by Robin Ince who been looking for Cookie Meuller and found Rosa’s article – Making it Real. Â (Robin Ince is a stand up comic BTW)

The one thing in common with all these links is the wish for people to have meaningful and life affirming experiences of death, dying and bereavement. Â  Â And the best way to do that is to talk, Â to shareÂ feelings, and be a support for one another. Â  Â What’s amazing is that through the internet, it’s now possible to find a sense of universal understanding and compassion from people we may most likely never meet. Â  Â  Â Â We are glad that, from our own tragedy, others have found some comfort (and perhaps example) from the things we’ve done for Josh.

The Compassionate Friends is a wonderful charity dedicated to supporting bereaved parents and siblings. Josh’s brother Joe, remember, raised a load of money for them earlier this year by competing in the Brighton Triathlon. Now TCF have asked us to make a promotional film to publicise their work. And we start filming this Saturday. Two days of interviews, followed by two possibly three weeks in the edit. Its a great honour to be asked to make this film and we’re very proud to be able to use our talents in this way to promote TCF. Â Follow our progress over the next few weeks and we’ll let you know when its ready for viewing.