SAY THEIR NAME, the film we made for TCF was up for an award for the Best Internet Bereavement Resource category of Â The Good Funeral Awards – andÂ whaddya know – we won it!

Hmmm… Strange trophy perhaps – a minature wicker coffin but given that the event is organised by THE GOOD FUNERAL GUIDE hardly surprising – and its bigger than an Oscar (and lighter than my Bafta!) Â  Â In effect The Good Funeral Awards are the annual shindig of what we have come to know as the “deathies’. Â  Â In attendance wereÂ the great and the good from the world of funeral directors, celebrants, bereavement counsellors, coffin builders and grave diggers – as well as Pam St Clement (whose on screen death as Pat Butcher in East Enders has clearly touched many a heart) was there to dish out the prizes.

Josh’s death is of course why we are here. Â If Josh had not died we would not have become involved with The Compassionate Friends, we would not have made their video, and we wouldn’t be standing shoulder to shoulder with some of the most caring, compassionate and enlightened people we have met, because in truth these ‘deathies’ really are such. Â  Â No morbid bunch of Â funeral stalkers these, more, this is a movement that is in the forefront of Â changeing the way we all deal with and talk about death. Â  It truly is a terrible thing, but in a way it has taken the death of our son for us to really find that degree of self knowledge that allows us to be more accepting of Â death and more comfortable talking about it. Â  To paraphrase one of the delegates Clarissa Tan – recognising “the finality of death is hard, but the uncertainties of life are perhaps even harder” – to talk about death really is to find out more about living.

And thats what we were doing in the run up to the award ceremony, as we joined a dozen or so others in a yurt in the garden of the hotel in Bournemouth. Â  Â  Have you heard of ‘death cafe’s’? Well this was a ‘death cafe’ and they are springing up all over. Â  Â A bit like pop up restaurants but with death on the menu … a freakish, weird thing to do by most peoples standards maybe, but here atmosphere was relaxed, intimate and unafraid – no one blinked and there were no awkward silences when one member announced she had cancer and we told of our loss. Â  Â All were equal whatever their story – death as the great leveller! 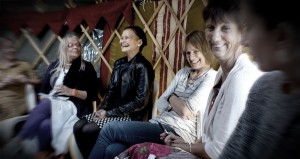 Back to SAY THEIR NAME and the awards. Â  This was a glittering, champagne laden affair taking the form of all such occasions – “the nominees are …. the winner is” etc. Â  And it didn’t disappoint as we sat nervously clutching each other, ready to be losers but wanting to win. Â  Ah! the competitive spirit that always trumps even the most sober cause. Â  Maybe not quite that sober. Â Acceptance speech? Â Jane was brilliant – no blushes and no gushes – enough said. Â  Â But Â we can say that representing the film and TCF at the award ceremony was a real honour if only because people Â have been so positive about it – as per these quotes

“One of the most moving pieces of film that Iâ€™ve seen and utterly deserving of multiple awards in testimony to the powerful truths spoken by the parents we saw.” Fran Hall
“Wow that is brilliant (she says wiping away tears) … Â I hope that I can use this short film in my work. That footage has really helped me especially today since yesterdays funeral of a 15 year old girl so tragically taken is fresh in my thoughts.” ClaireÂ
“Really beautiful work – to showcase such articulate storytelling and promote remembrance.”Â  Â Kathryn Edwards
“I was with each parent and sibling, deeply listening to them name and remember their loved one. Itâ€™s a good thing, this.” Kate.
I am still in awe of people who meet death everyday in their professional lives and I wonder what draws them to be undertakers, celebrants or soul midwives (a new one this). Â  I suspect most have had Â painful experiences, themselves, but instead of hiding them away, they are using them to help us all confront our deepest fear – not of death but of life.
Thanks for reading
Jimmy