Last week we survived (is that the right word) the second Two years ago last Wednesday 16th January Josh was riding along the Ho Chi Minh Highway, a couple of days out of Hanoi and on his way south. Then â€“ accident â€“ we are still not precisely clear what happened â€“ but in a second his life was gone.

That was two years ago and still itâ€™s hard to believe the reality of our lives. Each morning is still a trial â€“ one of having face yet again the enormity of the tragedy â€“ to wake and be brought face to face for the umpteenth time that Josh is no more and that our family of five is now so deplete. All made worse Â in the days leading up to his â€œanniversaryâ€ or his â€˜death dayâ€™ as we struggle but want to call it.

Just what does this particular day hold that the others donâ€™t? Do we really want to mark it was we would celebrate a â€˜birthdayâ€™? We know that many bereaved parents really dread the day and hate the idea that the anniversary of their childâ€™s death should in anyway be separated out from all the other terrible days of our lives. Its only a day, one moment in time that often bears no importance to the actual death and who invented time anyway.

But we think they are important. Last Wednesday, on Josh’s ‘deathday’, we met with Joe and Rosa and had lunch at one of his favorite restaurants in Borough Market, near where he used to work at the Ministry of Sound. We remembered Josh, considered how our lives had changed and made plans for our trip to Vietnam later this year. We placed the card his friends from the Ministry had sent at the end of the table and drank a toast to him and to us. This was our own private ritual, important for us to come together on a significant date and to recognize jointly what we all go through everyday individually. We canâ€™t always be together but if there are times when we can make an ordinary day special and shared with love, then surely joshâ€™s birthday and his deathday are those. The ritual is nothing if not the coming together in an act of shared remembering.

But what was also really comforting about the day were the number of emails, cards and text messages we got â€“ (such a relief from all the well intentioned but disturbing â€˜happy christmassesâ€™) and weâ€™d like to share some of these simply beautiful heartfelt messages now â€“

A card from one of Joshâ€™s old school friends â€“

â€œAnother year is upon us and although the passing days bring closer the realisation of what it means to be me without Josh, they dont make it any easier. This is a difficult day not just because the world lost Josh but because we are all reminded how fast and relentlessly life goes on…..â€

From one of Rosaâ€™s friends

â€œI am always here for you. These last couple of years I cant even begin to imagine how difficult it has really been and I am here for you every step of the way”

From a friend of ours-

From another bereaved parent

â€œthese anniversaries are awful days, we shouldnt have to have them in our diaries, it all just sucks. I will light a candle for Joshua tonight ….â€

â€œJust to tell you that we are thinking of you both as we come up to the second anniversary of Josh’s death. It must be an acutely difficult time for you and all the family. I know you will get support from each other. How to keep going when these things happen so randomly? Its impossible to answer these questions. Just let me know if you want to get out for a walk and a talk anytime.â€

These messages have given our family so much strength and really have made a difference. Jane was reminded of the day of Joshâ€™s funeral when she felt her heart would break but realized that she felt safe and held by the love of everyone present.

So much has changed since Josh died. We are changed along with the slow dawning that the pain of losing a child is like no other. Like love, and grief is in the end all about love, itâ€™s a pain that canâ€™t be regulated, medicated, reasoned with or got over. But with the passing of time we are beginning to accept our new lives without Josh, and his absence is easier to live with. But this is a slow slow process and has no timetable. It will be what will be.

So two years on what has shifted? Gradually the fear and anger that is actually a normal part of grief and has at times led people to avoid us, has lessened. And that sense of isolation, which has so much to do with being locked into the moment of Josh life and death while everyone elseâ€™s moves on, that too has dissipated and we are touched and thankful to our friends old and new who have found the courage to stay alongside us on our grieving journey. Our story, our website, our Josh have been featured in a new on line magazine ‘More to Death’.

The first issue is published this month and is free to download. Â In fact its an extremely easy and accessible read – just click on this link and your there. Â Lots of interesting stuff but our article “Grief and the Internet” is on pages 34 to 39.

â€œPeople donâ€™t really die on lineâ€. Â  Itâ€™s three months after the funeral and Jessica, a long standing friend of our son Joshua, has come to see us. Â  Although close playmates through out their childhood, they had grown apart since we moved away from London, their friendship still strong but mainly exchanged via Facebook.Â Â  They probably hadnâ€™t seen each other in the flesh for over a year when Josh was killed in a road accident whilst travelling in SE Asia.Â  He was 22.Â  Now we are standing by Joshâ€™s tree, a young copper beech, planted in his memory and for which Jessica had performed a song she had specially composed for the occasion and which talks of her sadness of not making more of an effort to stay in touch.Â  We share her regrets but in her remark we also realise that in some ways, life after death on the internet is not that much different from life before. Joshâ€™s Facebook page for instance is still very active; although he can no longer contribute, his on-line identity is still such that messages to him and postings on his â€˜wallâ€™ are an almost everyday occurrence. ….. 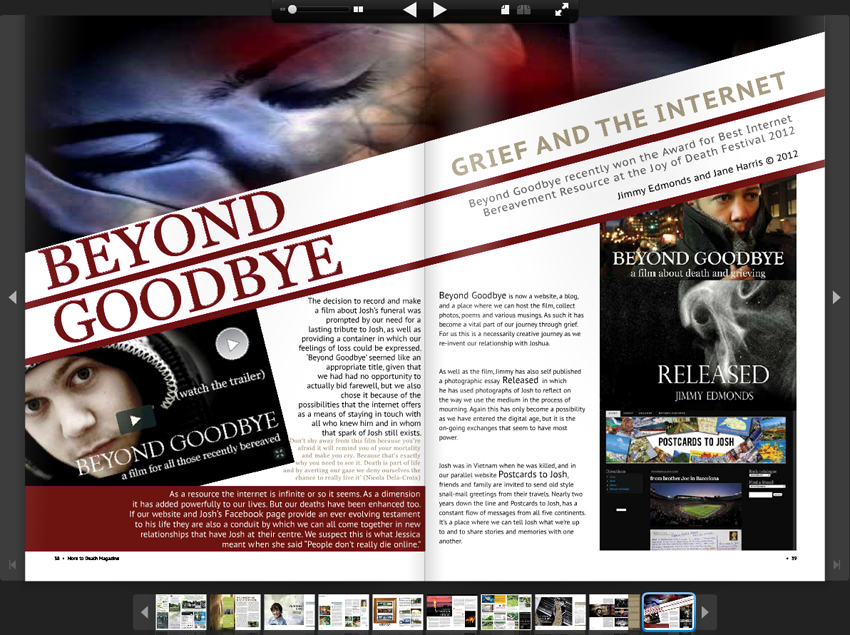 What’s it about – well its a link up between CirencesterÂ College where Josh did his A levels and the Ministry of Sound where he worked for a number of years. The Josh Edmonds Memorial Scheme (let’s call it JEMS for short!) is an annual award to any young person in Gloucestershire to work as an intern at MoS.

In honour of Josh’s own short careerÂ JEMS will give an opportunity for someone like him to follow in his footsteps and get a toe hold in the music industry.

So proud and thanks go to Andy Freedman at Cirencester College for hosting the scheme and to Lynsey Johnson (head of HR at MoS) and Lohan Presencer (CEO at MoS).

Lohan told us Josh “was a tragic loss to his friends at MoS. Hopefully this placement will give someone the same opportunities that Josh had and continue his memory”

for more info go to THE JOSH EDMONDS MEMORIAL SCHEME