We like to give big thanks to Tom Kihl who has helped enormously to build this website – (well he’s done the whole thing really).

We first heard about Tom in the days after Josh died when we were alerted to his blog Â  Coping with Grief via Facebook.

Tom was on the train to work when he read about Josh’s accident on Facebook and wonders whether social media with all their trivialities are the best place to be dealing with death and grief. But Â he also suggests thatÂ “for all the scare stories about social networks eroding cultural values, they equally offer a very traditional form of support during difficult times. And if they make speaking about â€“ and therefore coping with â€“ death a little easier for us collectively then that is surely only a benefit to society, however we end up redrawing the lines of etiquette and media behaviour.”

I find this a fascinating idea – if only because our friend Jessica Nathan (she of wonderful voice at Josh’s funeral) also commented – “people don’t really die on-line” Â  – discuss!

Here’s a link to an interview we did with Patrick McNally of THE DAILY UNDERTAKER Patrick asked some very interesting questions about how we organised Josh’s funeral, why we chose to “do it ourselves”, what it meant for us to create our own funeral rite for Josh. 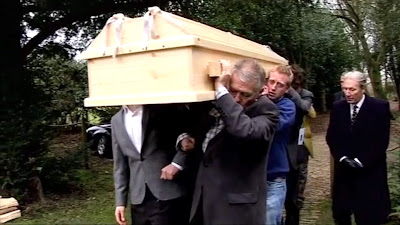 “I was so driven by the wish not to be afraid that Josh was dead but had no idea how to do that but by the end of the celebration of his life I somehow felt a lot less afraid than I had done.” Jane

“Two young police officers had brought us the news of Joshuaâ€™s death and for his body to be committed by more unknowns felt just too much â€“ you canâ€™t hug a policeman, neither did I feel like hugging an undertaker â€“ it felt like the only way to properly deal with this was to gather family and friends around and share our grief, and not just for half an hour at the â€œcremâ€. Jimmy

We have been asked to speak at Death: The Southbank Centre’s Festival For The Living on 28th January, which will be exactly a year to the day since Joshâ€™s funeral.

Information on the weekend of special events, talks, workshops and performances is here on the Southbank Centre’s website.

Our event is as follows, with entry gained with the Saturday Festival Day Pass.

Everything You Always Wanted to Know About Funerals (but Were Afraid to Ask)
3 â€“ 4pm, The Front Room at Queen Elizabeth Hall
When 22 year old Josh Harris-Edmonds died in 2011, the Harris-Edmonds family lost a beloved brother and son. The first thing they realised was that funerals are for the living. They arranged the funeral themselves and made a beautiful film of the ceremony. This special event is held on the anniversary of Joshâ€™s funeral, with a panel including Joshâ€™s mother Jane and his half-brother Joe who will show â€˜Beyond Goodbyeâ€™ – a trailer for the film documenting Joshâ€™s funeral. They will be joined by Charles Cowling of the Good Funeral Guide, and funeral directors including Chandu Tailor who specialises in Hindu and Sikh funerals. The panel, chaired by Lucy Neal, will dispel common funeral myths and show the different ways that funerals can help say goodbye.