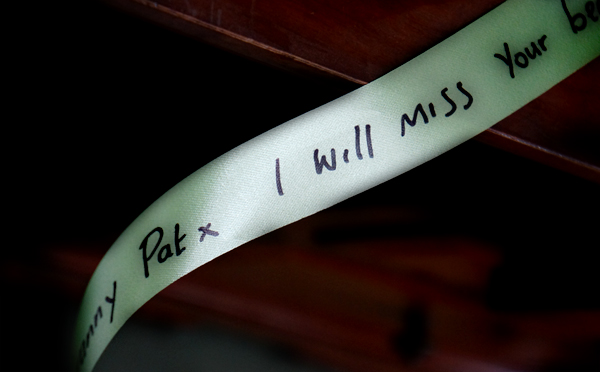 On Tuesday 5th August 2014 the Harris clan gathered for the funeral of Josh’s grandmother Pat Harris. This was the third family funeral in as many years and we were quite apprehensive about yet another cremation and the possible return ofÂ Â previous painful memories. As she bore her mother’s coffin into the crematorium Jane was conscious of her nowÂ ‘orphan’ status and what this might mean both as a daughter and a mother. In a sense we have been caught in the middle of different generational deaths – while we have a good enough wordÂ -Â ‘orphan’ – for a child without parents, we are yet to discover what we should call a parent whose child has died. And whileÂ the feelings and the sadness and the pain are so very different we both felt it important we should somehow equate them and make Josh too part of this ceremony for his grandmother. We have a lovely photo of Josh (aged 3) on holiday with Pat and Gerry – sadly one of only a few of the three of them – which we included on the order of service andÂ Josh was mentioned a number of times throughout the day. To be honest this isÂ not easy, we do not want to ‘dilute’ that sense of honour and respect we have for Pat, but at the same time her death and her funeral (as did Gerry’s) wouldn’t seem nearly as significant without Josh being there too. After all he was their grandson and theirs to mournÂ as we mournÂ them. 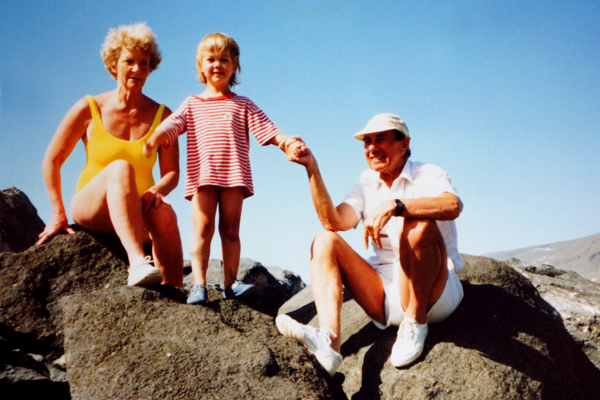 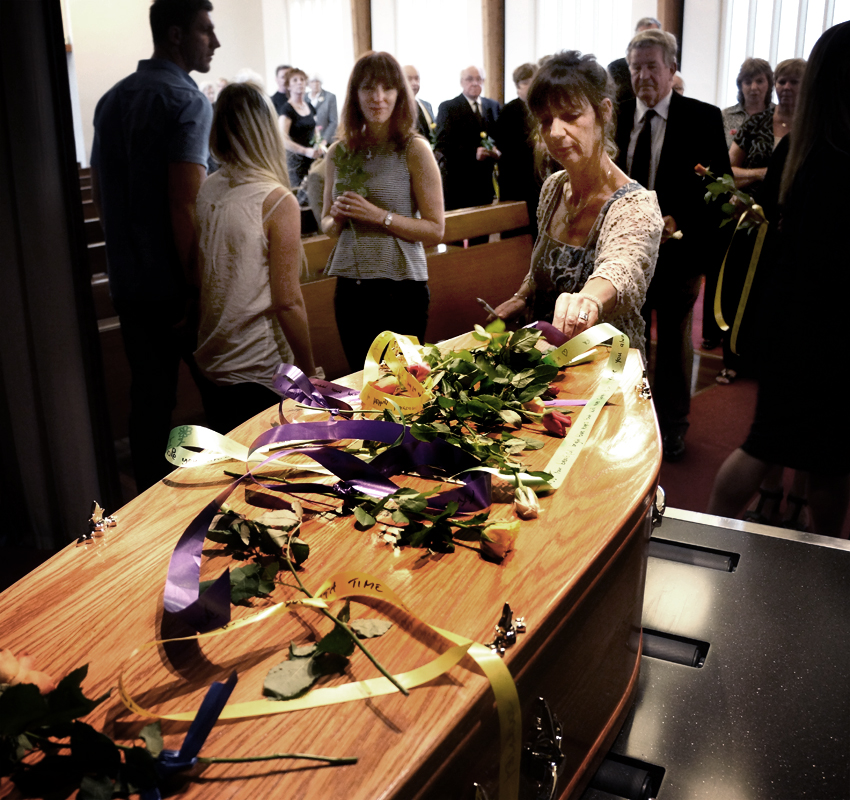 In the end this blending of memories seem to work even though many of Pat’s friends had never met Josh. Compared to the way we said ‘goodbye’ to Josh, both Pat’s and Gerry’sÂ funeralsÂ were more mute affairs though we carried forward the idea of inviting people to write messages on ribbons which could be tied to a flower and laid on the coffin as a central ‘doing’ act to the ritual. Â  Although there are strong Jewish roots to the family, our funerals are non religious and perhaps a bit ‘modern’ provoking one elderly relative afterwards to remark “what kind of funeral was that?” Our wonderful celebrant Ian Stirling was quick to respond – “that was a Pat Harris kind of funeral.” 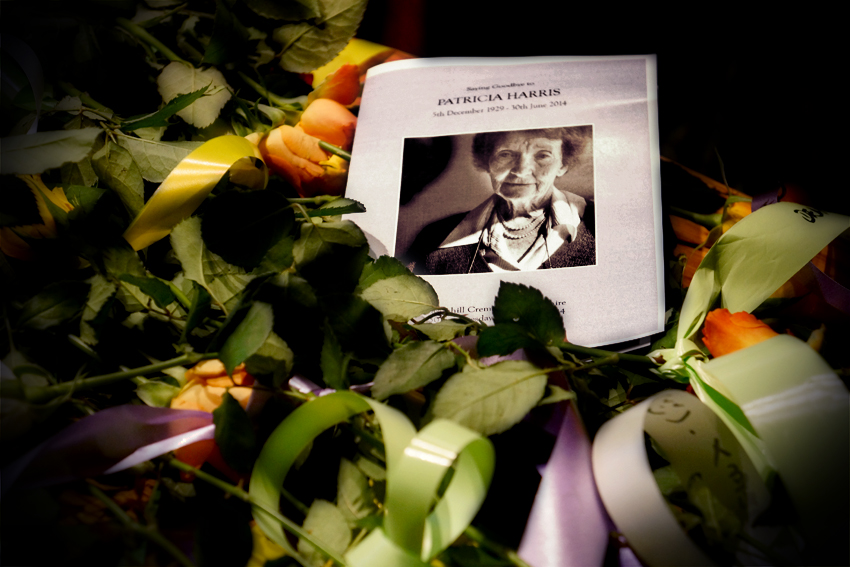 Funerals are of course for the livingÂ – andÂ for what we take away from them as much as the memories we bring. We were all very moved by the poem that Jane read at the service and reproduced below. We know now that grief is hard work, maybe not so much for the death of a parent or a grandparent as it is for your child; but work nevertheless. And in that work, and in that experience of grief, inevitably we learn new things, new ways of looking at life. That is the gift our loved ones leave us.

After a while you learn the subtle difference
Between holding a hand and chaining a soul,
And you learn that love doesnâ€™t mean leaning
And company doesnâ€™t mean security,
And you begin to learn that kisses arenâ€™t contracts
And presents arenâ€™t promises,
And you begin to accept your defeats
With your head up and your eyes open
With the grace of a woman, not the grief of a child,
And you learn to build all your roads on today,
Because tomorrowâ€™s ground is too uncertain for plans,
And futures have a way of falling down in mid-flight.
After a while you learn
That even sunshine burns if you get too much.
So you plant your own garden and decorate your own soul,
Instead of waiting for someone to bring you flowers.
And you learn that you really can endure…
That you really are strong,
And you really do have worth.
And you learn and learn…
With every goodbye you learn. 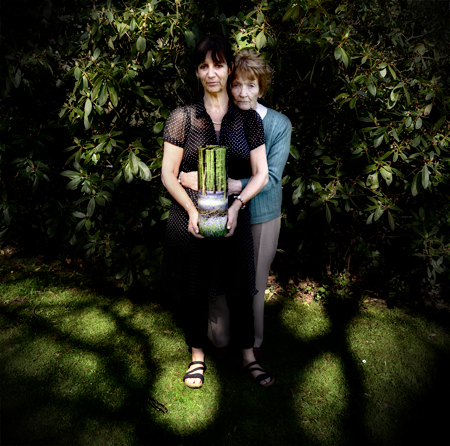 This is one of the last photos we took of Pat, just two months before she died. We had recently collected Gerry’s ashes from the undertakers (this was over a year since he died -Â why it took so long is anybody’s guess) Â and Pat had asked that they be scattered around a particularÂ tree in the old family home near the golf courses in Troon. The tree had been given to them as a wedding present in 1951 and was one of many that Gerry planted subsequently in theÂ manyÂ years they lived there. But the house now has new owners Â and we needed to get their permission. We had planned to do this on our next visit but life and death intervened. 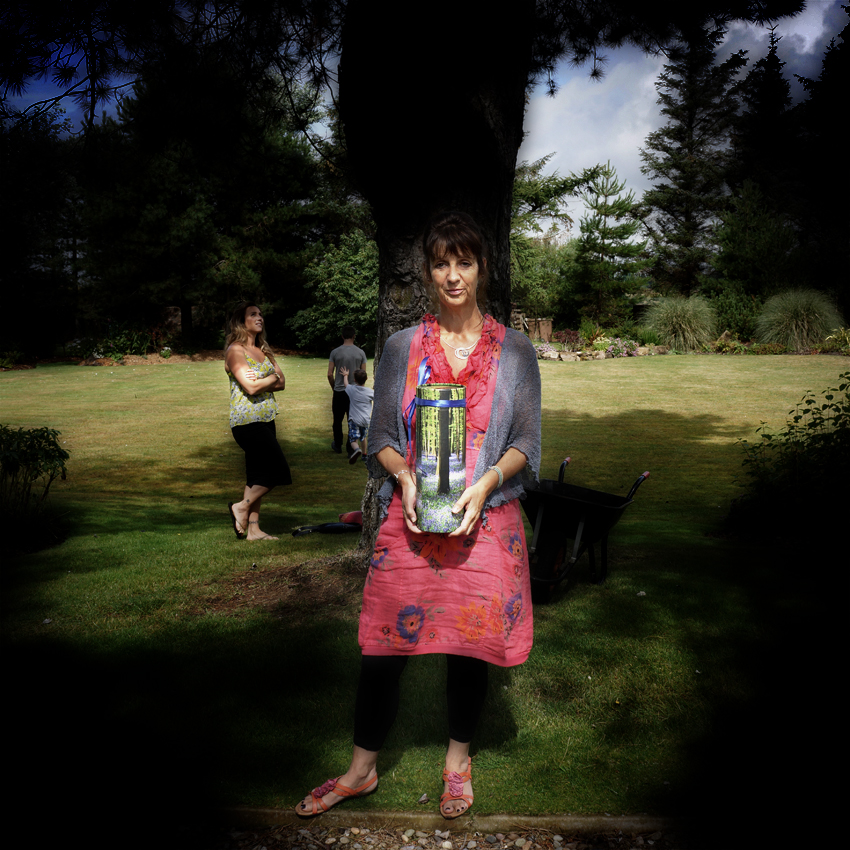 It was the day following Pat’s funeral then, that we met again for another special ritual. Jane had asked the present occupiers of the house who kindly obliged – and with considerable grace as their afternoon was about to be disturbed by eight adults and two children, none of whom were dressed in the manner customarily required for the dignified disposal ofÂ a family patriarch. Â  Â Neither of us can remember being so involved in the funerals of our grandparents. In fact we were positively discouraged from even attending. In those days it wasn’t seen at all appropriateÂ that young children should be present on such occasions – something to do with protecting their innocence, shielding them from sadness, from raw feelings. Yet here we were half a century later, on a bright summer’s day wandering around somebody else’s garden, carrying a box of human remains and with kids in tow!

‘With every goodbye you learn …’ Â  Â And that learning can and maybe should start at any age, best done in the act of doing, of actual participation inÂ ritual.Â For Pat and Gerry’s great grandchildren, Naomi and Louis, even while they may not recognise the full meaning of thisÂ day, hopefully they will remember the weight and the feel of their forebears ashes as no less fearful than the Â bark on the treeÂ andÂ the dirt in the ground. 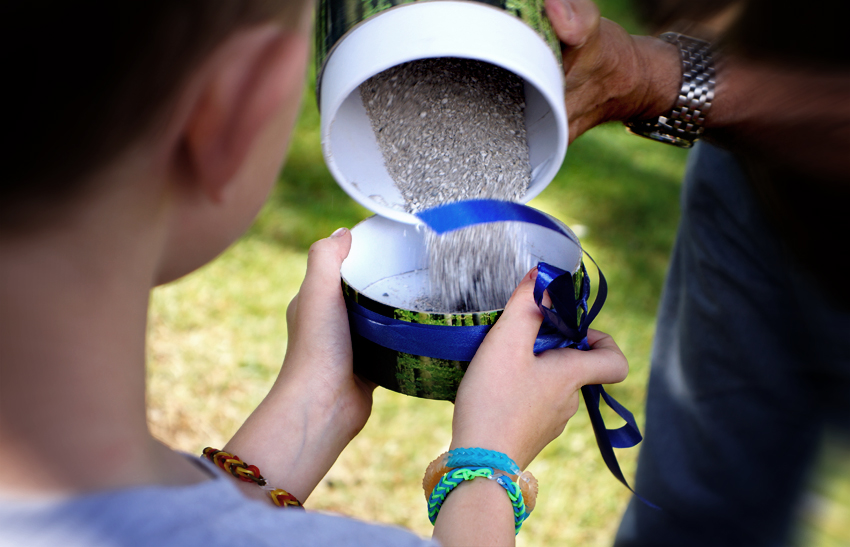 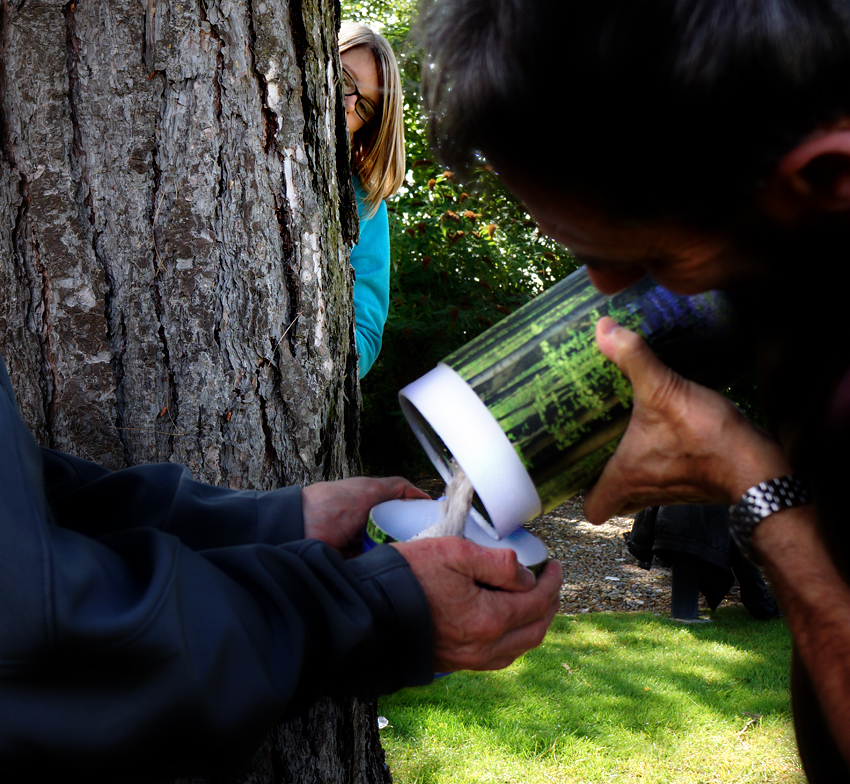