Jane’s mum, Josh’s Grandmother, Pat died on Monday last (30th June) peacefully and in her sleep.   She had been admitted to hospital a few weeks ago with pneumonia and what looked like the beginnings of multiple organ failure but then released as her health and prospects had clearly improved.      Late last week though, everything seemed to shut down again and she was readmitted.   Jane joined her brother Richard by her bedside.   Rosa also travelled up to be with her Granny (having first left Glastonbury!).     Pat was 84.    Jane reflects on the experience of  witnessing her mother’s  death. 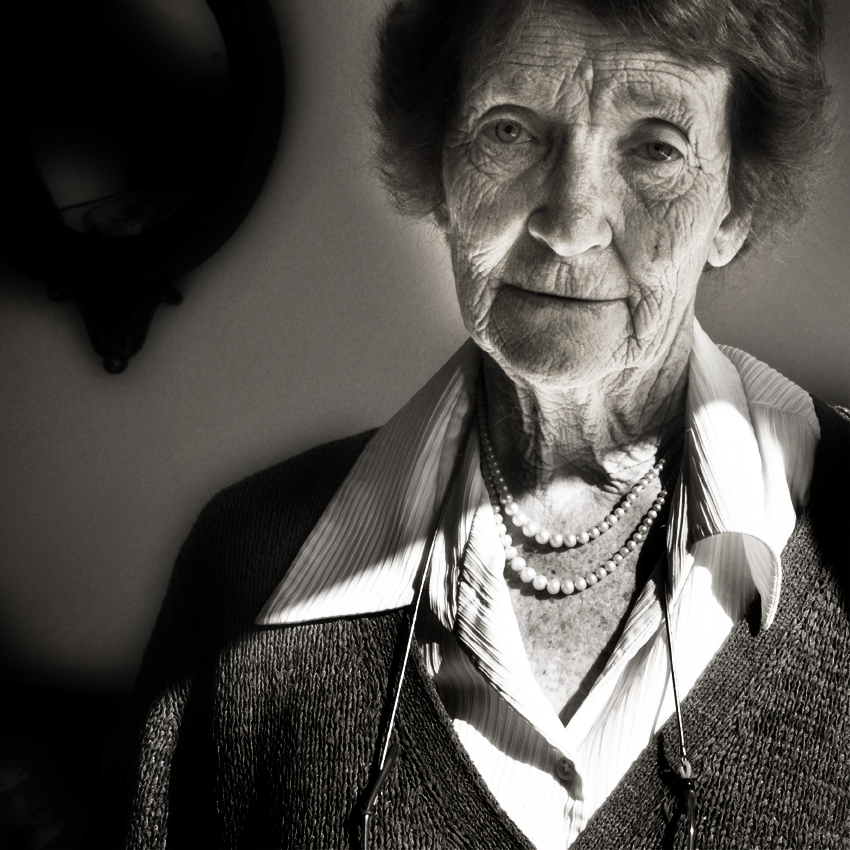 After my Dad Gerry died last year, my mum seemed to be in fairly good health, until suddenly a few weeks ago she took very ill and was admitted to Ayr General Hospital near our home town of Troon in Scotland. At that time she was given a 50-50 chance of survival. It was a bit of a wake up call for us as a family but the coin landed the right way up – or so we thought. Two weeks later she was back in hospital and we were informed that this time Mum will not recover, in fact she probably only had days to live.

So when I caught the earliest train I could from our home in Gloucestershire it was with the sincere hope that I would get to the hospital in Ayr in time – a seven hour journey that felt like much more. Our last meeting a couple of months previously had been very difficult. My Dad Gerry had died a year ago last January and Mum had finally decided that she’d like to have his ashes at home with her so she asked me to pick them up and bring them round. But when we arrived (Gerry’s remains were in one of those tall cylinder cartons especially designed for scattering) it seemed it was all too much for her to deal with and I felt I was the messenger getting the blame for daring to suggest the idea. On leaving that time there was clearly a tension between us but never for a moment did I consider this would be my last visit before she was admitted to hospital with just days left to live.

Now as I stared at the familiar countryside of the Scottish Borders gliding past, I realized that what I really wanted, was to be able to tell her that I held no blame or bad feeling for this or any of the other differences we’ve had.  She is my mum after all and maybe a little thing like what to do with Dad’s ashes shouldn’t get in the way of my being fully present with her in her last few days on earth.  Dad’s ashes are now at my house, where they still wait while we decide how we honour them and him …   but for the moment I’m pushing these thoughts away along with the idea that I’ll soon have another set of ashes to take responsibility for. I was going to be 59 in just over a week and there is something very strange about the possibility of a birthday without parents. For the first time in my life I’m getting a sense of being properly grown up. You might have thought that Josh’s death would have propelled me into full maturity … but then his death didn’t leave me being a member of the oldest generation in our family.

My brother Richard was by Mum’s bedside in her own room when I arrived at the hospital. Mum was awake but clearly quite scared and panicky.   He told me she had multiple organ failure, that she was too weak for an operation to clear the fluid in her lungs and the end might be quite near.   Over the four years my Dad had been in hospital we’d had many conversations about his impending death and it had become quite apparent to the whole family that Mum was not at all comfortable with the thought of her own.    Now as I watched my mother gasping for breathe and clearly in real distress, it became obvious that we had to do something about the  manner of her dying, if only to help ease the frightened state she seemed to be in.    I was also  unsure whether hospital was in fact now giving Mum palliative care.    She was getting some pain relief but this was only being topped up as and when she became so short of breathe  she was actually fighting for air.   Was this going to be the way my mother would die?    Crying out in anguish as her body fought for life?   Together with the hospital we had agreed there would be no further medical intervention or any attempt to keep her alive, but why should she have to end her life in fear and alarm. 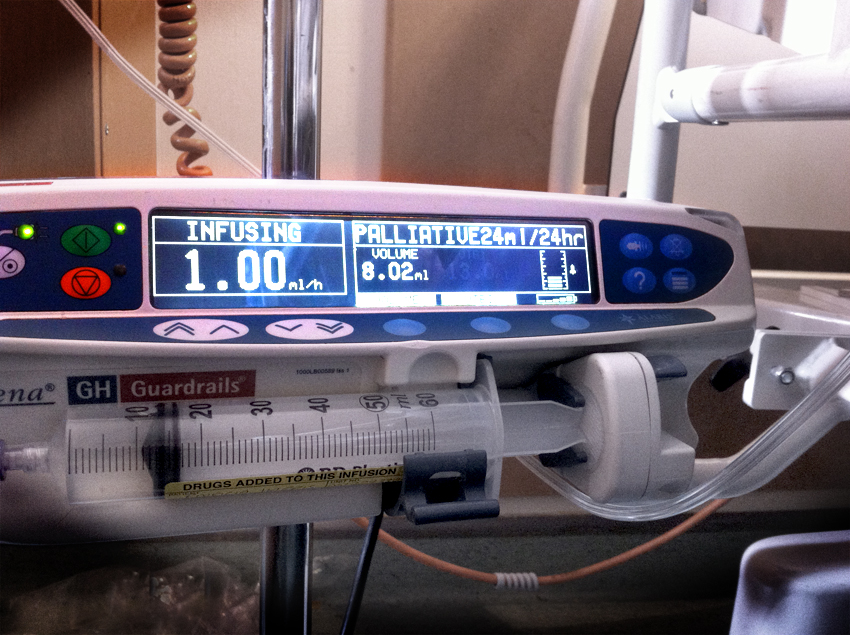 This was still the situation when late in the evening, we decided I would stay with mum for the night and Richard exhausted by 48 hours of solid vigil, would go home to Mum’s house to sleep – a hard decision because it meant I was now on my own with Mum and her distress was mine alone to witness.   I would admit to a sense of deja vu, as I anticipated another fight with the hospital system in order to realise for Mum a better death than she was currently likely to have.   I’d spent years battling the NHS for better care for my Dad, and frankly I was tired, tired of constantly being a ‘difficult’ relative who only wants the best for their parent.   As it happened half way through the night a doctor finally did appear and  hooked up a syringe driver that would give Mum a continual dose of morphine and other drugs.  I found myself staring at this machine, watching the numbers on the gauge as the plunger made its steady and predictable journey towards zero.  I had never been more aware of death as a process rather then as an event, the drugs were sparing mum the agony of any panic she might be experiencing, but they were also presumably creating a thick fog in her consciousness which I imagined was what she would have wanted as she passed away.

I have never watched someone die before, not my Dad, not Josh (oh, how could that be possible) and I found I was strangely calm, almost hypnotized by the rhythm of my mother’s breathing which seemed to come from lower and lower down her body.   The distant voices from the nurses station provided a kind of reality check  to what felt like a strange dream.    Then for awhile a cleaner came and sat down beside me.   “Just keep talking to her hen” she said  “You ken she can probably hear you…”

At first light the next morning I took a break and a short stroll around the hospital grounds. I was grateful for the attention the staff had shown me throughout the night, reminding me that to be there for my Mum I also need to look after myself. I thought I knew Ayr hospital quite well (too many visits over the past few years) so was surprised to find a stone sculpture of a young girl letting go of a dove just outside the staff canteen.   Maybe it was the cool of the early morning air but the stillness and the serenity of this small sculpture seem to speak volumes – I was helping to let Mum go.

I had been in two minds whether I should let Rosa know that her grandmother was dying.   I was aware that her granddad had died the year before and that as family we were still very much in shock following Josh’s death. We were all still desperately trying to adapt to life without him and I wanted to spare her the experience of yet another loss. She was also at Glastonbury and presumably having a great time. But at the same time I could hear Rosa’s voice saying ‘no secrets’ and ‘ how come I’m always the last to know’.   So I’d asked Jimmy to ring her.   She was tearful and terribly upset at first.   Then without a moment’s thought  she declared she would leave the festival and come and see her gran one last time.

It wouldn’t be until the following day that Rosa would get here and in the meantime I was concerned that Pat’s breathing was becoming even more laboured and more erratic. Again I found myself hoping against hope that Mum could hang on for her granddaughter.   A selfish thought maybe but I knew it could be a truly cathartic experience for Rosa, to witness death as an ordinary event, as a gentle passing of an older family member, not the extreme trauma of her brother’s death.

Rosa arrived late on Sunday afternoon still in her muddy Glastonbury wellies, a fact to which the nurses turned a blind eye.   Once she had gotten over the first sight of her Grandma looking so poorly, so frail, so helpless with her oxygen mask on, she immediately relaxed, dried her eyes, and settled down to hold Pat’s hand.   And I realized immediately why Rosa had come.   She needed to be here, to connect.   But in a way, Rosa and her youth were also the connection bridging the gap between my motherhood and my ‘daughterhood’.  Then again Rosa’s capacity to deal very straightforwardly with what was in the room, her lightness of touch and the ease with which she could accept the reality of a soon to be death, brought another level of relief to both myself and to Richard.   We spent the rest of the evening, chatting away, reminiscing, not sure if Mum could hear us, or was even aware of our voices, our laughter, but it all felt very right.   Here we were three generations waiting for death to arrive, doing what people have always done. In this moment we were sitting by a whole history of deathbeds, attending to a whole history of ordinary deaths, whiling away the hours before every death that is in the right order of things. This was death without surprises and without false hope, a natural and as good as can be death, a death without trauma which might even bring some kind of equilibrium back into our lives. 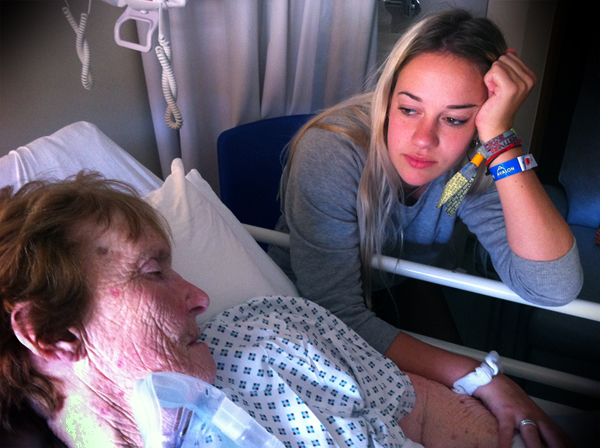 Pat Harris died at 7.30 the following morning.   It had been Richard’s turn to stay overnight and he called to say she was now at peace.   Rosa and I returned to the hospital and were led into my mum’s room, now cleared of all monitors, drip feeds, oxygen bottles and all the stuff that keeps people alive.

With the blinds drawn down, a soft orange light infused the room and in the stillness I tentively stroked my mother’s hand, still faintly warm. I thought fleetingly that now I am an orphan. And so is Richard.   A year and half ago, my Dad died in this very same hospital. We had now together twice experienced that intimacy that being with death brings.   Knowing death as a mother is beyond my capacity to describe (I will, I’m sure you know, never ‘get over’ Josh’s death) but knowing death in this the natural order of things is strangely life affirming and as a family I think we are stronger for it. 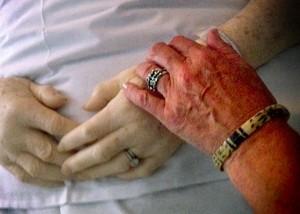 I’d like to thank all the staff on Station 9 at Ayr Hospital for their compassion and thoughtfulness during the six days Mum was in their care.

And thank you for reading

and here’s a few photos from the family album