Year Two of the Josh Edmonds Memorial Scheme is officially on the road and applications for a month’s internship at the Ministry of Sound are now open.    Anyone aged 18 – 25 working or studying in the county of Gloucestershire is invited to apply for the opportunity to work as an intern at one of the UK’s leading music brands.      The scheme is run jointly by Cirencester College and the ‘Ministry’ in memory of Josh who studied at the college and then went on to work at MoS, initially as an intern himself.     By the time he left he had become one of the clubs most prolific video producers, making over 200 clips for the brand.    The placement is designed to help a young person from Gloucestershire get a similar foothold in the music industry, and to explore the opportunities that Josh made for himself.

LEWIS LIGHTS UP THE SHOW

At the launch this week, Josh’s mum, Jane introduced Lewis Murphy, the first successful candidate who gave a lively account of his experiences at the Ministry of Sound last July.   Lewis paid tribute to the two Josh’s in his life.  The first Josh is his own friend from schooldays, and like our Josh a passionate fan of drum n bass.   Tragically Lewis’ friend Josh also died at an early age so its was with a ‘double edged’ sadness that Lewis embraced his opportunity to make the  most of his time at MoS. 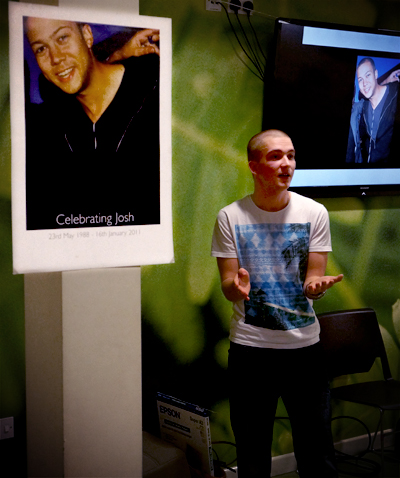 But he has truly given it his all, he made a BIG impression at the club, and we thank him for bringing such a wonderful energy to his role as ‘first candidate’.   “The people I met and the experiences I had are irreplaceable” he told us  “I can now look back at those times and reflect on how much of a career springboard it was by looking at where I am at now.” Lewis, a University of Gloucestershire student until earlier this year, now works for leading drum and bass label, Emcee Recordings.    Lewis told us he will always remember the ‘two Josh’s’ and the strange coincidences that led him to “actually getting paid” for work he had until recently only dreamed of.

The audience at the launch also heard from Cirencester College Principal and Charlie Gray one of Josh’s best friends from school and London.  Charlie told how he often worked with Josh on TV shoots and was ‘amazed at his knowledge and input’ he had on set.  “In a short space of time he became a huge asset to MO and  a great example of someone who started at the bottom and worked their way up. The ‘Josh Edmonds Scheme’ is a great chance for someone to have an opportunity similar to the one that he made use of so well.’ 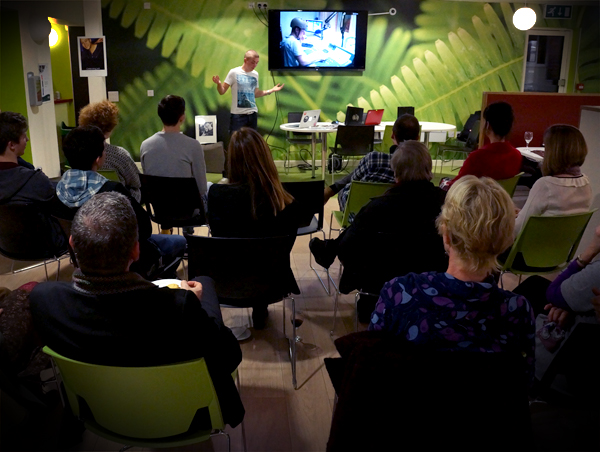 Following in Josh’s footsteps – on the radio!

Earlier in the day Jane had popped into the radio studios at BBC Gloucestershire to help promote the scheme on the Chris Baxter show.  Following in Josh’s footsteps is what its all about, said Jane as she was joined by Lewis on the telephone.

Click on the links below to listen again to the broadcast.   Some excellent stuff here, Jane acknowledges the ease which young people can talk about death and Lewis reveals those strange coincidences.

This is Part One

How to apply to the JOSH EDMONDS MEMORIAL SCHEME –

If you are between 18 and 25 years old, live or study in Gloucestershire,  you can download the application form here.     Along with personal contact details you will need to write a short statement about why you’d like to work at the Ministry of Sound and send us an online link to a piece of your own work.    This can be music or video production.  Completed forms must be returned by 28th February 2014 to anita.pring@cirencester.ac.uk.   Shortlisted candidates will be asked to come for interview in March and the successful applicant will start work at MoS in July. 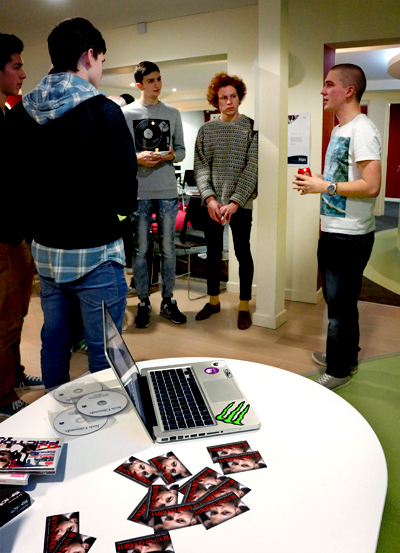 Lewis encourages some applicants to the scheme

While working at “The Ministry” Lewis wrote a daily blog which you can read here Lewis Murphy – Candidate One.