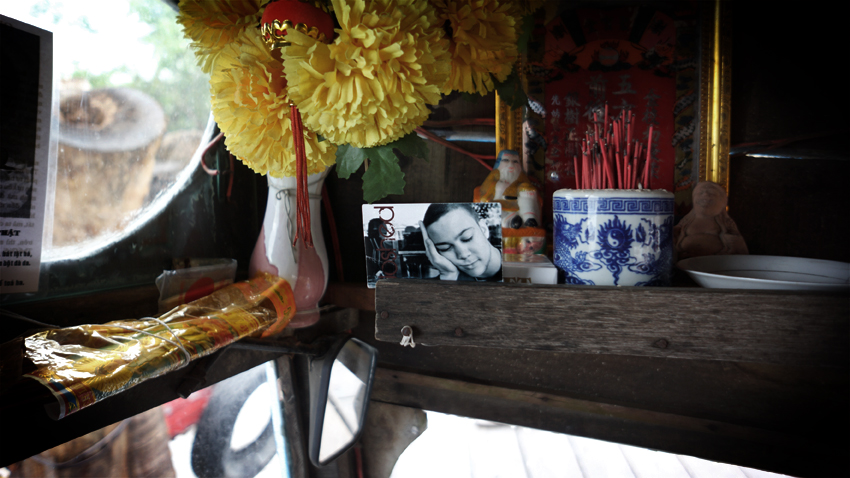 Arrived mid evening after 14 hour flight via Dubai feeling buzzed out but not too tired. Â The taxi from the airport was our first experience with Vietnamese traffic, the driver leaning on his horn while weaving through the only other vehicles on the road â€“ motorbikes, motor cycles, scooters â€“ the rules of traffic being seemingly non existant. Hands over ears and eyes most of the time. Check in to Hotel Continental â€“ spartan but comfortable â€“ not as â€˜faded gloryâ€™ as I had imagined â€“ polished marble floors, chipped paint and spotlessly clean if a little soulless â€“ the colonial era has given way to socialist efficiency. If Graham Green and Somerset Maughan had stayed here thereâ€™s no sign of these illustrious guests â€“ any other hotel would have huge pictures of them in the lobby . Â  There was however a massive photo of a bride and groom â€“ weekends is wedding time as Michael the butler from Claridges would say and over this weekend the hotel would cram three in. Â  The first of these was in full swing in the courtyard, the music rising with the heat and causing Joe and Rosa some concern for their sleep. Jane and I had a room on the other side of the building. Jane was out like a light but I stayed awake till 1.30 having started to watch a documentary about the American war in Vietnam â€“ â€œHearts and Mindsâ€ a brilliant and beautifully made film.

When you open the hotel window on the morning of your first day in a foreign country, the novelty of it all wraps round you like a brand new scarf. Â The heat, piped music from the square, the advertising hordings, the constant roar of motorbikes, all confirmation that we are here at the start of our journey to find out more about the country Joshua was traveling through. The motorbikes of course have special significance â€“ Josh was riding a 100cc Honda Win when he died and every time I see one of these bikes, my thoughts spin back to those earliest imaginings in the days after we received the news of his accident. Â But Â already I’m getting a sense that these machines and the roads they inhabit are not ‘the accident waiting to happen’ as we had feared. Â  Â To ride in what looks like chaos does not mean it is unsafe though I guess a fundamental requirement is to have 360 degree awareness of everyone else around you.

Breakfast was a disaster â€“ every conceivable meal and taste seemed to be catered for â€“ porridge with meat balls, noodles, dim sum, as well as croissants and fruit yogurts. The coffee was disgusting â€“ was it laced with cardamon, coriander, or chicory â€“ probably none of these, maybe all of them. I decide to stay with jasmine tea with slices of tropical fruits.

We spent the first part of the day Â wandering the streets of central Saigon â€“ it is Ho Chi Minhâ€™s birthday tomorrow and there are red flags and posters of him everywhere, even a special photo display in the square. Something to look forward to. We donâ€™t have a lot of time in Saigon so whatever we do will be very cursory â€“ a spin through the market, a visit to the War Museum, a high speed lift up the cityâ€™s archectural icon to modernity â€“ the Bitexco Financial Building, a meal seated on childrenâ€™s stools on the pavement. This unsurprisingly turned out to be the better of any of the food weâ€™ve eaten. There was a menu but our order disappeared further off down the street to someone squatting over a small stove in a doorway. Call me old fashioned but food hygiene in the modern world leaves a lot to be desired â€“ taste! 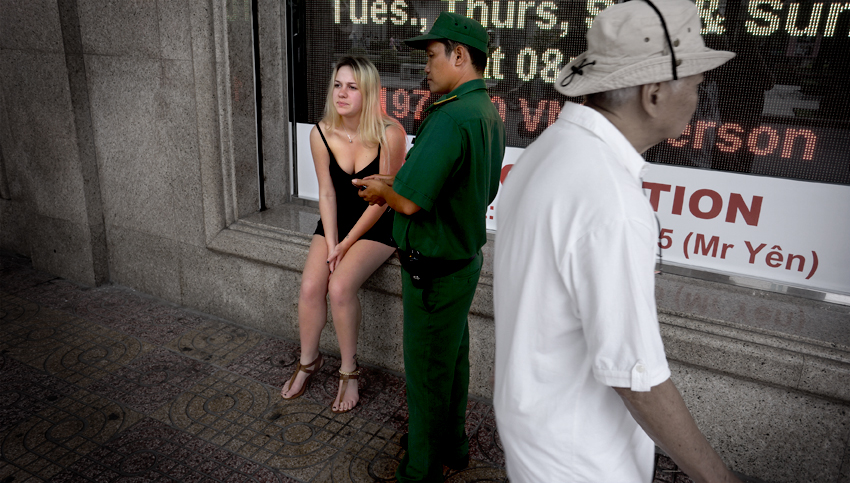 Her first day in Saigon and Rosa is picked up for soliciting !?!? Â  Â (photo: Jimmy)

On Sunday we became a bonefide contributors to Vietnamâ€™s booming tourist economy with the purchase of a day trip to the Mekong Delta. The mini bus arrived at the hotel at 8.15 on the dot – standard Viet punctuality – before rounding up our fellow sight seers from the various other internationally branded hotels in central Saigon. On board were Korean, Chinese, Japanese, even some Vietnamese all with American accents. Our destination was My Tho, nearly two hours away down Highway One. Just to make sure we were on the right road in the right country our guide galloped us through 3000 years of Vietnamâ€™s history and the two Indochinese wars â€“ the first against the French and the second against the Americans. I didnâ€™t catch every word â€“ his English was good but heavily accented and what with the constant beeping of the buses horn I think I just about got a sense that his war, or what would surely have been his parents war was in effect against the communists. Vietnam opened up to tourism with the lifting of the US blockade in the early 1990â€™s and the influx of foreign capital. Our guide seemed happy enough with this development. In one of the first documentaries I cut for television, â€˜Apocalpse Thenâ€™, I well remember a scene with huge Coca Cola banners hanging on the faÃ§ade of the Hanoi Opera House â€“ (the equivalent would be 20 metre high portraits of HO Chi Minh draped over the National Gallery by Trafalgar Square). The Vietnamese call this â€˜market socialismâ€™ and in copying the Chinese, have adopted what is probably the most efficient and most developed form of capitalism, a state controlled commodity economy in which one of the best sellers is history and authenticity.

A short boat trip from the bus station across the river and we were in what was explained to us as a â€˜villageâ€™ and we were being shown around a â€˜villagers houseâ€™ just down the path from the local â€˜marketâ€™. It felt very conveniently mapped out for the continual stream of cameras and video recorders. On sale was of course was, every traditional handicraft – sarongs, t shirts, lacquer bowls, coconut sculptures, much more than I care to remember. We were then invited to sit and enjoy some â€˜traditionalâ€™ folk music includingÂ horribly scraped out versions of John Lennons â€˜Imagineâ€™ and â€˜Auld Lang Syneâ€™. Â I suspect that we havenâ€™t as yet found the Vietnam that Josh was getting to know.

On our return to Saigon, we found that the celebrations for Ho Chi Minhâ€™s birthday were non existantâ€¦ mind you he is a symbol of revolutionary fervour, not necessarily of capitalist growth, something that has been in double figures for the past two decades.