Josh died on the Ho Chi Minh Highway near the town of Vu Quang in the north of Vietnam just over two years ago. Â Two years that have both flown and dragged by. Â  Two years and his death still seems so unreal, so unnatural. Â  The boy that was becoming a man, venturing abroad to discover what life had in store for him – how could he not now be living that life.

Perhaps we have too many photos and film clips of him – so many good memories shielding us from the pain of his death, of his absence; so many happy, vibrant, quizzical pictures of Josh as alive as any could be. Â  Too many good stories that have, in a curious way, built up a fog of uncertainty around the fact of his death; a fact that should have been confirmed when,Â the day before the funeral,Â we all four of us stood round his casket and gazed on his lifeless form. Â We stroked his cold hands and kissed his cold forehead and tried to take in this awful reality. Â  Â We were with him then for an hour, maybe only half an hour, who knows; time stood still. Â Â But hovering in the night air, the question no parent should ever have to ask: Â “why is our son so quiet; why is he lying in a box?” Â Â We were there; his mother, father, sister and brother. Â  In his jeans and T shirt,Â Josh was there with ashen face, and sightless eyes. Â  Â We must have known the answer to that question Â  Â  Â  Â But that was then and this is now and time has discarded the evidence that was once so very clear. Â  If my mind ever told me thenÂ that Josh has not and will never return home, my soul has continued to say no, still and forever no; this is not Â true; Â he is not dead. Joshua is out there still, wandering somewhere in this big world of ours.

As a family we always knew that one day we would travel to Vietnam to visit the spot where Joshua had his accident. Â And that day is almost here. Â We fly out on 16th May. Our initial idea was to continue Â Josh’s own journey, with a bit of an overlap. Â We would start in Laos travel through to Hanoi and then journey south to Saigon and from there to Cambodia. Â This would have been Josh’s plans as he made his way back to Thailand and thence to India and Nepal. Â Maybe one day Â Jane and I may well do this, but for now we have decided to concentrate on visiting Vietnam and Cambodia. Â We will want to soak up the atmosphere, particularly of Vietnam so that we can have a sense of the place that Josh was enjoying so much.Â Starting in Saigon (Ho Chi Minh City officially but still referred to locally as Sai Gon) we will then spend a week in Hoi An before visiting Vu Quang where we hope to meet with the school teacher that spoke English and helped Josh’s friends with the aftermath of the tragedy. Â  Then tracing Josh’s last journey in reverse we will spend next few days in Hanoi including a nightover in one of the many junks that cruise Halong Bay famed for its thousands of small limestone islands.

Joe will have to go back to work after two weeks but Â Jane, Rosa and I will then fly down to Siem Reap in Cambodia, and gorge on all the temples of Ankgor Wat and the surrounding area, before traveling through to Phnom Penh and hopefully a few daysÂ lazing on one of the many tropical islands in the Gulf of Thailand. Â  Â  Thats the plan but who knows, and who cares if it actually works out like that.

What’s important for the four of us, is that the trip is both a kind of pilgrimage as well as a well earned holiday. Â  Josh will of course be with us all the way but we don’t want his death and the sadness we all feel to get in the way of what can also be a journey of discovery. Â When Josh died we were all changed in ways we never thought possible and certainly never wanted. Â  This trip may wellÂ beÂ our chance to find out more about who we have become. I don’t think we are looking for ‘closure’ (as some have suggested) or that after we have been to the site of the accident, that we can then somehow “move on”. Â  Who knows what we will feel, or how we will react. Personally I feel a desperate need to connect with the place whereÂ Josh died so suddenly;Â not so much as a way of imagining a horror of the scene, more as an attempt to encounter a reality, an ordinary everyday reality with ordinary people, peopleÂ who may wonder why we are there, why we have arrived at this particular bit of roadside. Â And when we stand silently together, looking for signs, for clues, maybe take photographs of the empty highway, perhaps then we will know that the circumstances of Joshua’s death are both mundane and extraordinary. Both so deeply personal, so individually painful, as well as so universally commonplace. Â Perhaps then I won’t have to dig so deep,Â past days and months of waking up to each morning’s cruel reminder, past the continual background noise of Josh’s death, past all the things we have done to create a new life for him, to find that ghost of a memory that tells me, yes I did see him lying there … dead as ever dead can be.

An important moment will be Joshua’s 25th birthday on 23rd May. We will be in Hoi An and Â it just so happens that the famous Full Moon Festival for May is on the 23rd. Â Apparently its not at all like the full moon beach parties of Thailand where everyone just gets smashed out of their head – this really is about honouring traditional cultures with lots of poetry and folk music and of course thousands of lanterns. Â So we’ll definitely be setting one off Â for Josh.

Watch out for regular postings to this blog while we are a away – checkÂ Josh’s Facebook page,Â Postcards to Josh, and throw in some of your own thoughts and stories to the comments below – with lots of love Â Jimmy 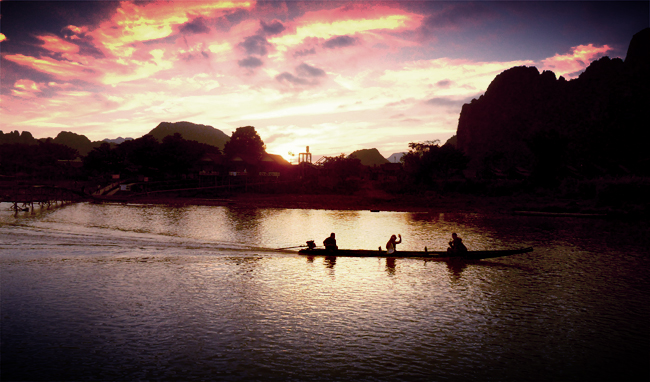