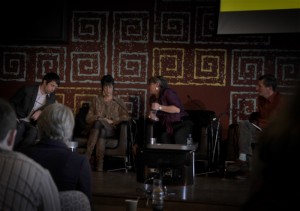 Attending the â€˜Everything you always wanted to know about funerals (but were afraid to ask)â€™ session was always going to be painful. I went in dread and â€˜excitedâ€™ anticipation as I knew I was going to hear from two panel members, Jane (mother) and Joe (brother), talking about surviving the profound and still raw grief of losing Josh: a young man lost to an arbitrary event, euphemistically labelled, â€˜a road traffic accidentâ€™, thousands of miles from home, whilst on a â€˜trip of his lifetimeâ€™ in Vietnam.

As if already foreshadowing the distress, we were told that Jimmy, his father, and sister Rosa, were not going to be on the panel, but in the audience: talking about â€˜itâ€™ was, well, too much, of course.

And yet exhibiting a courage (or was it stupidity!) I could not imagine in myself, Jane and Joe graced the audience by allowing us to gain even the tiniest insight into their experience of Joshâ€™s death, the funeral and life â€˜Beyond Goodbyeâ€™ (the title of the film depicting Joshâ€™ funeral of which we saw a short extract).

It is a curious experience writing about the event because although it was a collective moment (in fact 60 of them, it was an hour-long session), at the heart of it lay a paradox: namely, just like funerals, each and every member of the audience had a distinct and deeply personal experience. I will therefore be sharing, in effect, only my own idiosyncratic associations. The first, takes me back to the intensity of the insufferable grief. Not as a deafeningly â€˜noisyâ€™ cry from deep within, but a quiet, equally painful instant, captured on those two or three occasions when Jane would â€˜passinglyâ€™ mention the loss of, â€˜my son, Joshâ€™. It was not so much beyond goodbye, as beyond words, and so all the more gut wrenching. Put more simply, I â€˜found myselfâ€™ crying. I canâ€™t say anymore about this.

The second personal dynamic related to an issue that was raised by a question from a member of the audience, who braving a rather difficult question, dared to speak of getting over â€˜itâ€™, Joshuaâ€™s death, in fact any tragedy. Jane spoke from the heart reminding me of the alcoholic whose only path is to â€˜take it a day at a timeâ€™. Again that hurt. What so surprised me was Joeâ€™s response. It was as if I was listening to a mystic sharing his wisdom. Over the top I know, but especially given his tender years (30, perhaps), I was taken by his description of his experience as like Janeâ€™s, but also slowly, slowly, slowly, finding what he called â€œdifferent levels of acceptanceâ€ as time passed, with the inevitable â€˜collapsesâ€™ in between. Joe managed to convey both the horror and also the possibility of â€˜beyond goodbyeâ€™.

To them both I will be forever grateful for allowing us access into the unimaginable.