When I heard about Rosa’s work I immediately wanted to see it.  In my reading and research on mourning one of the things that had surfaced was the importance of art and creativity as a way of representing and registering loss and communicating its feelings. For myself following the early death of my mother I had not had this channel and I wanted to see , given Rosa’s family background of creative expression how she would do this.

The first thing that struck me was the atmosphere of her exhibition space, a small internal room which despite being full of people had a hushed and sacred feel to it.  A long slim picture stretched from wall to wall in which each of Josh’s possessions which came back from Vietnam was photographed individually  in line. I found this piece powerful and poignant. These were the everyday objects of a life- Josh’s wallet , passport, contact lenses, bike lock, matches watch.   These were mundane objects and yet now they seemed to have acquired a brutal significance. The last objects Josh chose and touched. His last things that had returned where he had not. For me there was something about these ordinary things and the intimacy of them that felt deeply moving. 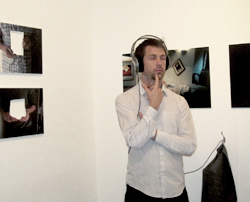 The title of Rosa’s exhibition was Absence. An audio loop played  a recording of the voices of his family and friends narrating the dreams they had had about Josh since his death. On the wall in front were three photos depicting one of Jimmy’s dreams. For me these voices ebbing and flowing and fading in and out of each other had a penetrating and haunting quality. Again I was struck by the intimacy of it. Here was a window into the dream worlds of Josh’s loved ones.. Here were their individual voices at times shot through with emotion weaving in and out of each other. Listening I was flooded with the impact of the loss of this so loved young man.

The third series of photos were of Josh’s family  each holding one of his things which had been cut out leaving a silhouette and a  blank empty white space in its place. Rosa’s title was Absence yet what struck me forcefully was Josh’s ongoing presence in the hearts and minds of his loved ones. The room was full of his family and his and Rosa’s friends. There to support her and share in her creative communication.  She was also awarded the photography prize for her year, an acknowledgment I felt of the power and depth of her work  and how it clearly moved those who saw it .

My own mourning was inhibited by what I now see as a damaging  emphasis in our culture on mourning as primarily an isolated, individual and finite process, ending in the cutting of the bond and  “moving on”. For me what Rosa achieved in her brave expression of her loss and how supported she was in it bore out my own experience and findings. These are that in mourning we ongoingly need others. We need to communicate , not be shut away in an isolated process. Far from cutting our bond we need to nurture and transform it. This is not a denial that the relationship with our dead loved one will never be the same again but that we need to build this relationship in a new way and that we fundamentally need others in order to be able to do this.

Fiona Rodman is a psychotherapist and the author of “Sifting for Gold” – Mourning and Transformation.   (MA University of  Middlesex Nov 2011)    She is currently working on her next book – a further exploration of contemporary practices in mourning and grief.