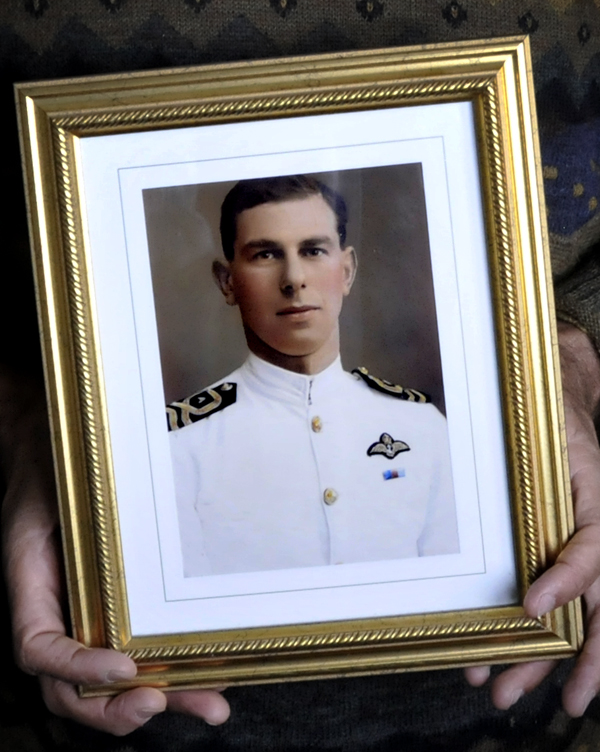 Death is always a shock. Even though Joshâ€™s grandpa Gerry had been living with dementia for a good many years; even though he had recently been moved to the end of life ward at the hospital where he spent the last four of those years;Â  even though we had been told that his temperature had dropped to 31 C, that he had been put on the Liverpool Care Pathway and was not expected to last for more than a few days or weeks; even though we had visited him and could see for ourselves that Gerry would not â€œbe getting up from this oneâ€, still death comes as a shock.

Joshâ€™s Grandpa is Janeâ€™s dad and we loved him very much.Â  That is why his death, his life no more, is still hard to take in.Â  Gerry was 95 and had had a good and inventful (sic) life.Â  The obituary in the Glasgow Herald headlined him as â€œbusinessman, inventor and pilot who taught Prince Philip to fly.â€Â Â  He was nearly 80 when his last creation, a revolutionary fire fighting device,Â won the John Logie Baird Award for innovation in 1996. Â Â We are sad to see him go, but we are at peace with his passing. Â Unlike Joshâ€™s, Gerryâ€™s death is in the natural order of things. Â  Â  Â If there is a timetable for death, if there is fairness in death, then clearly Josh died too soon and Gerry perhaps too late.

But justice is a concern for the living – for death itself there is no moral dilemma.Â Â  It remains for us who would still breathe to make an account of these deaths, to mourn them as we do, and to wonder if there can be anything like a good death.

By strange coincidence, on the weekend between Gerryâ€™s death and his funeral, Jane and IÂ  had attended a symposium on â€œwhat makes a good deathâ€.Â Â  Organized by the Wellcome Foundation, and intended to contribute to a growing conversation about death and dying, we were both curious about how others were dealing with and talking about this so-called â€˜difficultâ€™ subject.Â Â Â  The show opened with various readings from literature including Roger McGoughâ€™s poem …

When I’m 73
and in constant good tumour
may I be mown down at dawn
by a bright red sports car
on my way home
from an all night party â€¦.

It continues in similar vein.Â Â Â Â  To my mind a rather distasteful attempt to glamorize death, to sanitize it and to take death away from its natural place as a conclusion to lifeâ€™s inevitable story.Â Â Â  In these lines you can find both Gerry and Joshua but neither of these deaths were in reality what McGough would wish for as his own â€˜goodâ€™ death â€“ Josh never got to be 73 and Gerry,Â instead of a slow decline to a morphined non-existenceÂ would,Â I suspect, much rather have gone out with a bang.

What the poem does point to though is the wish to have some kind of conscious control over how we die.Â Â  In modern society this is presented almost as a consumer choice; the planned for death, with living wills and demands for legally assisted suicide.Â  The more agency we have, the better our death will be â€“ if it is we, that is, who are doing the dying.Â Â Â Â  But what of those left behind?Â Â Â  After â€˜ourâ€™ death it is still left to the living to mourn the nature, tragic or otherwise, and the consequences of our death.Â Â Â  So perhaps a better question to be asking is â€œwho is the good death for â€“ the living or the dead?â€Â Â  Â Or both.Â Â Â  If we understand our lives, our individual selfish lives to have meaning only in relationship with others, (â€¦â€¦ no man is an island etc) then our dying and our being dead can only find fitting resonance with the survivors of our death.Â Â Â  For both Gerry and Joshua who now know no more of their lives, this is actually meaningless.Â Â Â  For us it couldnâ€™t be more relevant.

While Gerry’s was to be expected, the unnatural circumstances of Joshuaâ€™s death precludes an easy ‘inbetween the sheets’ kind of mourningÂ as we struggle to continue our relationship with him. Â  His life cut short creates a vacuum not only in our hearts but also in the story we would want to tell of him: we fill it by projecting our wishes and ambitions for himÂ on to the future he never had.Â Â Â  If Josh were alive now, heâ€™d have found another job, heâ€™d have found another lover, heâ€™d have traveled again, set up his own video production company making underwater music films, he might even have gone back to college.Â  Our dreams for Joshua will forever haunt our nights and days, but we have no need for such fantasies for what an old man might do with the rest of his life.Â Â Â Â  A good death is perhaps possible only after, what McGoughâ€™s poem doesnâ€™t reveal, that which makes for a good and full life, as lived by Jane’s Dad, Gerry.

How then to tell of the life that gave life â€“ that gave life to Jane and thence to Josh and our other children?Â Â Â  I have known Gerry for as long as I have known his daughter.Â  My first encounter with him was when he took us out for dinner soon after the two of us had got together.Â  I was immediately taken and excited by his anarchic behaviour, his unabashed sociability and his seeming need to display both as publicly as possible.Â Â  If there was a table to dance on heâ€™d be the first on it. 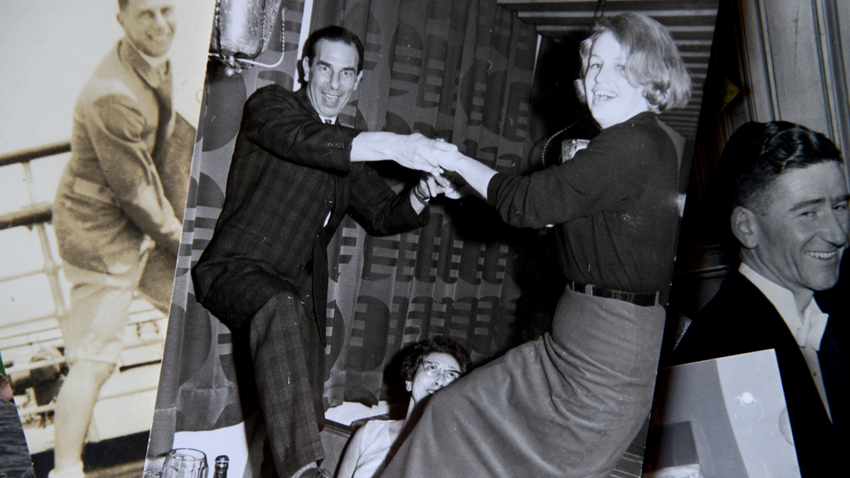 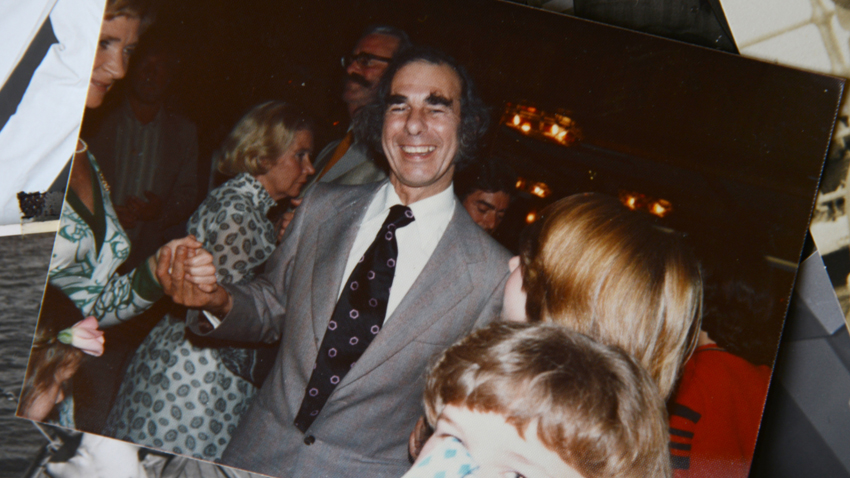 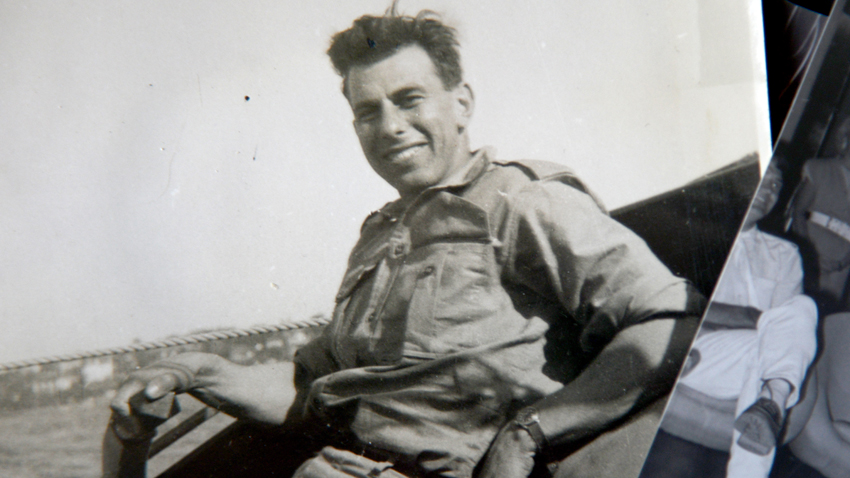 Gerry Harris was an engineer by trade, but I knew him best as a difficult father, an over protective husband, a terrible businessman, a gifted if slightly bonkers inventor.Â Â Â  Gerryâ€™s triumph was BLASTER, a water jet that started life as a new form of garden sprinkler but ended up as a fire fighting device that could drench flames in seconds and with minimal water damage.Â Â  Gerry had first showed me his creation a few years before and we now have precious video footage of him running round his garden in the pouring rain as he attempts to activate a series of sprinklers made from bits of bicycle and beer bottle caps.Â Â  These rudimentaryÂ  contraptions were to become BLASTER or â€¦ wait for it â€“ â€˜Boundary Layer And Surface Tension Energy Releaseâ€™.Â  By introducing a carefully positioned rotor blade in the path of the water jet Gerry had found a way to turn water (a liquid) into water vapour (a gas), so reducing the amount of water needed to put out a fire by a thousand fold.Â Â  Gerry was not only well into his 80â€™s when he discovered this but also well on the way to establishing a principle that may still revolutionize fire control. Â  Â

Gerry began his last journey 5 years ago when after a series of small strokes he developed vascular dementia, a cruel disease that slowly robs the person of their capacity to reason and to hold thoughts in any meaningful way.Â  From our visits to see him over this time itâ€™s difficult to say whether Gerryâ€™s emotional being, his own personhood, suffered a similar decline. Â The one question the family always seemed to be asking â€“ how much of Gerry is still there? â€“ was never really answered.Â  But death stalked that question at every turn as the frustrations of the disease and its affects on other members of the family began to take its toll.Â Â  That and the inadequacies of the care system that Gerry seem to be caught up in â€“ all seemed to conspire to invite deathâ€™s continual refrain â€“ when shall you summon me? 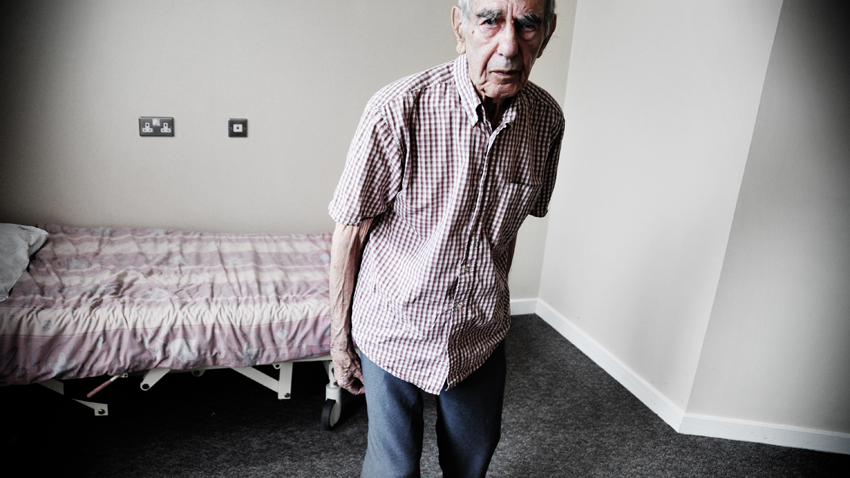 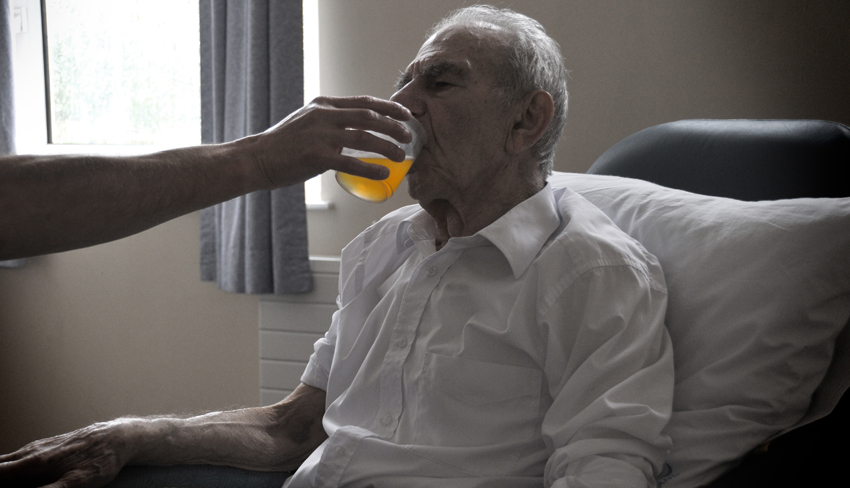 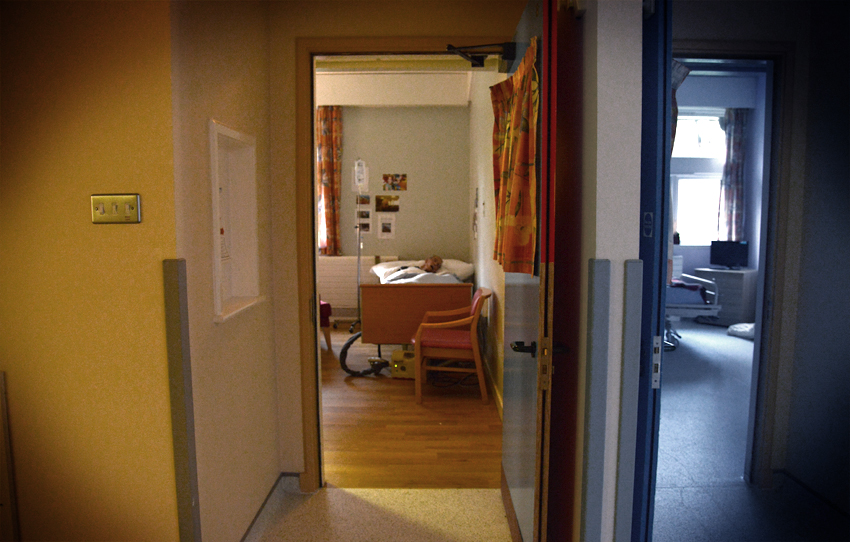 In fact Gerry exhibited super human strength in his will to stay alive.Â Â  Whilst in hospital he broke his hip twice occasioning major surgery both times and was later sent back to the ICU with a collapsed lung.Â  Gerry was fit.Â  He had incredible energy both mental and physical.Â Despite the progress of the disease Gerry remained bored out of his mind, and despite being confined in his chair, no longer able to walk, he remained constantly on edge with an almost manic inability to sit still.Â Â Â  Ironically it was this energy that would keep him living with the distressing effects of dementia for so long.

You can see something of Gerry’s life in this short film we prepared for the family to watch the day before his funeral. Â  Â An early scene in which Gerry recites one of his favorite poems was filmed shortly after he was admitted to hospital. Â  Click on play button in the bottom left of the screen.

Putting this film together was, as you might be able to imagine, a rather delightful experience, sad but rewarding and I was honoured to be able to do this for Gerry and for Jane’s mum Pat and her brothers. Â It felt like I was contributing to the postscript to a long and successful life story. Â  Â  What I was not doing was dealing with a trauma. Â  In that sense their was no distress, no break down of confidence, no insecurity, no fear, all of which were so present in the months following Josh’s death. Â  Â  Equally and despite the initial shock of witnessing Gerry’s lifeless form, I suspect we will be able to ‘move on’ from his death in ways that we are not able to with Josh. Â  This I think has to do with the way that we as parents are changed as a result of the death of our child – fundamentally and irrevocably changed.

By contrast to Joshâ€™s, Gerryâ€™s funeral was a very small affair, this partly because of Janeâ€™s mumâ€™s wish to keep it very low key and private, but also because of the simple fact that by the time you get to 95 you actually donâ€™t have many friends left to bid you farewell.Â Â  Josh of course was known by many, old and young.Â Â Â  If there over 300 who came to say goodbye to Josh, just 12 of us attended Gerryâ€™s funeral not including the celebrant and the funeral directors.Â Â  But it was no less meaningful for that.Â Â Â  There was something poignant in its very ordinariness that gave comfort to the idea that death is survivable, no matter if itâ€™s your grandfather or your son. 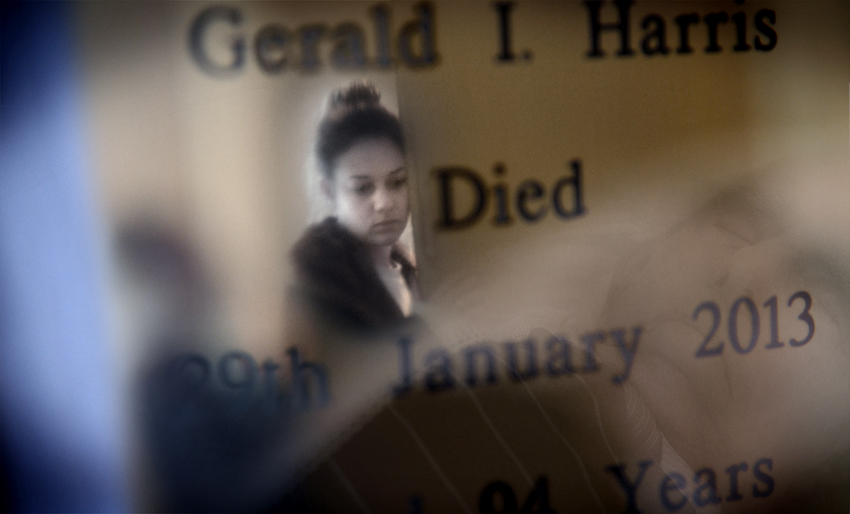 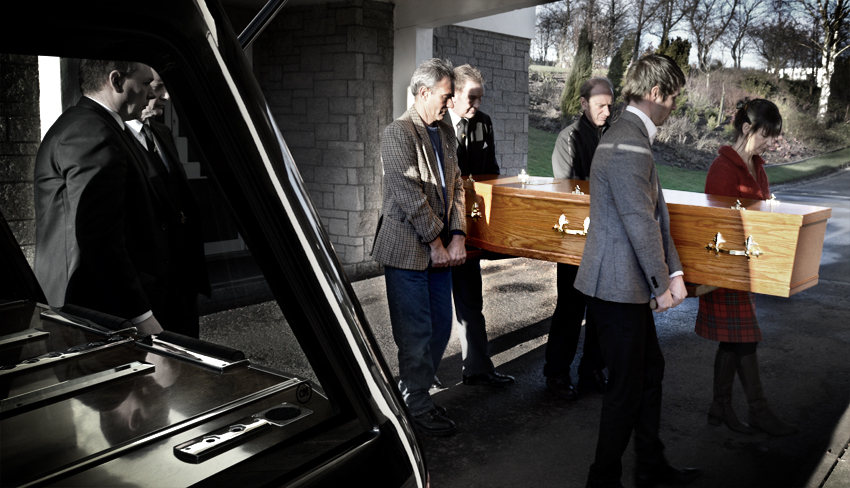 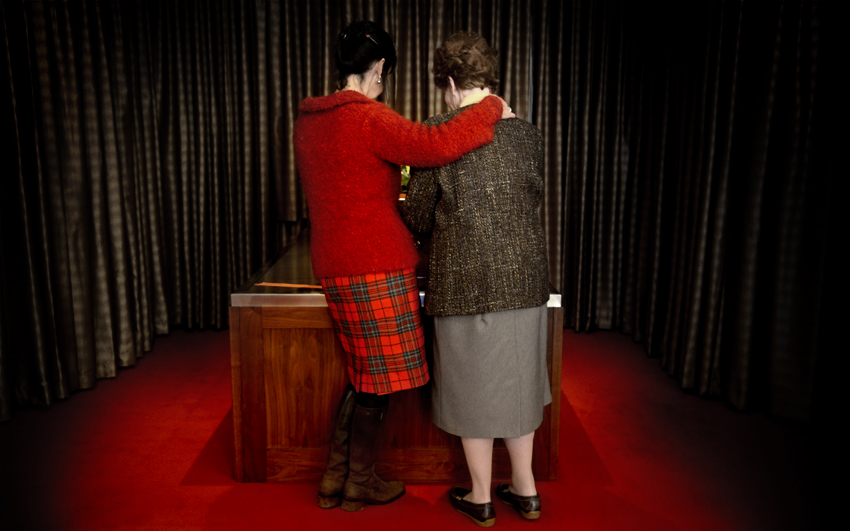 photos by Jimmy and Rosa

…. Â and for our film about Josh’s fundraising efforts for Alzheimers Scotland