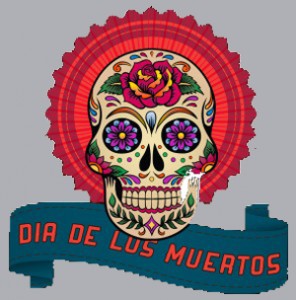 By coincidence while Jane was helping to launch the Dying Matters BEING THERE Â campaign in London last month (2nd November 2014) our older son Joe was in Mexico visiting Hollie, one of Josh’s best friends. Â  Â  Â The Dying Matters event was the focus of their annualÂ Day of the Dead celebrations and guess what, Joe and Hollie were remembering Josh at the real deal in Oaxaca, birthplace of Las Dias de Muertos. Â  Â Here is his account of their day … 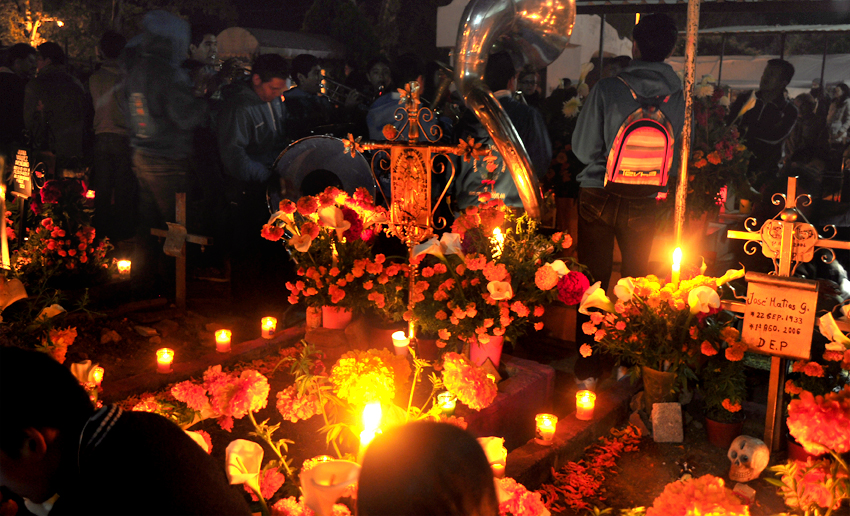 We experienced Dias de Muertos here in Mexico in Oaxaca City. Each year Mexicans celebrate the dead leading up to 2nd November (Dias de Muertos) by creating colourful altars for their loved ones that have passed, dressing up in death related costumes and face paints, drinking and eating and holding street parties. Within Mexican tradition, the 2nd of November is kept for the dead to return to this world and share in the offerings given to them.

Having lost aÂ brother andÂ a best friend, Hollie and IÂ Â wanted to honour our Josh this past weekend and ensure that his presence and soul was celebrated. We created a colourful mobile made of traditional Mexican tin, that carried pictures of Josh on star shaped card and little skeleton figurines and a sacred tin shaped heart. We visited a candle lit vigil for the dead in a cemetery just outside of Oaxaca Centro. The scene was magical.Â Night had fallen but the cemetery was lit up with candles, bright marigold flowers and the sound of music from people playing instruments and singing beside the graves of their lost ones. 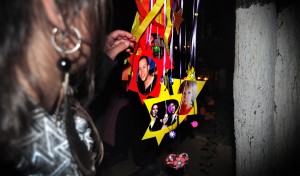 We found a suitable tree that Josh could now call his own and hung his mobile to a branch. We scattered Josh’s ashes at the base of the tree and shared a small bottle of tequilla with Josh whilst sitting with him.

Although in the UK, it is not un-common to see relatives and friends visit Â a cemetery and to hold time with a lost loved one, this experience felt very different. A more shared experience and less private, where visitors walked in between the dead and were invited to learn more about them. The dead felt more alive due to the decoration of their graves and how families were sitting, eating, drinking or even singing or having a smoke with them. 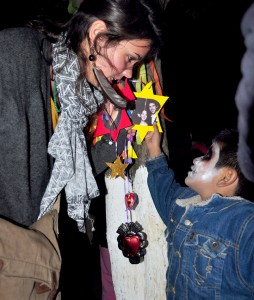 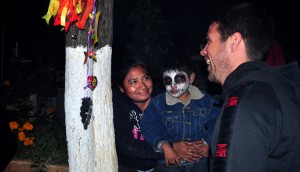 We shared our love of Joshua with a mother and a wonderful young child who became instantly interested in Joshua’s memorial mobile. He asked questions about who Joshua was to us and it was nice for us to introduce him to Joshua. He was so taken with the mobile that Hollie simply had to give him the sacred tin heart for keeps! He was chuffed to bits.

Here in Mexico, people’s relationship with death seems very honest and open. The dead are not forgotten. They are celebrated and seen as still part of this world.

Josh’s mobile still hangs in the cemetery and now he has two trees in this world he can call his own. 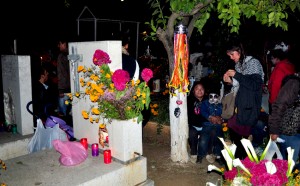 Almost half of Britons (47%) say they would feel uncomfortable talking to someone who has been recently bereaved, and many bereaved people have experienced negative reactions to their grief, including people avoiding them and the loss of friendships, according to a new study released by the Dying Matters Coalition.

This is a finding of a special report commissioned by Dying Matters to coincide with the launch of a new campaign designed to support people with what to say andÂ do after a friend or family member has been bereaved. The BEING THERE initiative comes at a particularly poignant time for many bereaved families – this is the lead up to Christmas, a time when, as in our case, the absence of a loved one is more keenly felt.Â 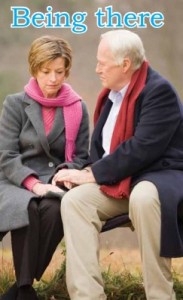 BEING THERE is addressed to people who like many of our friends have naturally moved on their lives and away from the intense pain that we feel. This is normal but it is also very hurtful – the affect upon the bereaved is to suffer not just one loss but many … with death being such a taboo subject in our culture, grief too becomes a feared emotion and all too often our friends and family shy away from a state of mindÂ they see as uncomfortable,Â disruptive and avoidable.

So the BEING THERE campaign is a really good starting point for all those wanting to know what to say and do as well as what not to say when a friend or family member has been bereaved. Â  Here is a link to the Dying Matters press release : 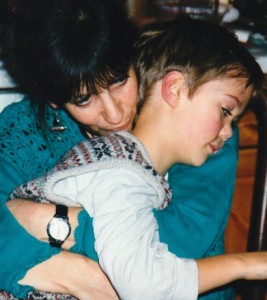 Josh’s mum Jane is on their advisory committee and contributed to the launch of BEING THERE Â with a number of radio interviews across the UK including BBC Radio 5 LIve, Radio Scotland, Gloucestershire and London and the West Midlands . Â  This is what she had to say about her conversations around Josh…Â â€œWe discovered that whenever we talked about our son Josh to friends and family there were awkward silences and people just didnâ€™t know what to say or do for the best or even avoided us altogether. The first Christmas after Joshâ€™s death was particularly upsetting, especially when we received Christmas cards that didnâ€™t even acknowledge his death. However, talking about our loss, remembering Joshâ€™s life and being allowed to say his name really helped us, as did the kindness and support from those people who went the extra mile to be there for us.â€

The Compassionate Friends, the charity which supports parents following the death of a child of any age, has launched a guide to getting through Christmas when someone so important is missing:Â Coping with Christmas

Annie BroadbentÂ is the author of new book ‘We Need to Talk About Grief’, which gives first-hand advice on supporting someone who is grieving:Â visit Annie’s website

Kate IbbesonÂ has written a blog about feeling unsupported at Christmas following the deaths of her parents:Â Read Kate’s blog

SilverlineÂ provides information, friendship and advice to older people who may feel alone; the free helpline is open throughout Christmas:Â Silverline