We have three films showing at the first ever Stroud Film Festival.

As you may know our home town of StroudÂ in Gloucestershire,Â is known for its slightly quirky and alternative arts culture and hosts a number of festivals throughout the year, many of international repute. Â  Â So we have festivals for music, the visual arts, textiles, print makers, photography and now a cinematic treat. Â  Among the films on offer during theÂ two week festival will be Vim Wenders 3D masterpiece about the choreographer, Pina Bausch simply titled ‘PINA’ , Nick CaveÂ inÂ ‘20,000 Days on Earth’ and Kiley Kraskouskas’ unforgetable ‘The Last Song Before the War’ – the story of Mali’s annual musicÂ Festival in the Desert which came to a halt in 2012 when separatist rebels and Islamic militants seized control ofÂ the north of the country.

The Stroud Film Festival runs from 13th to 29th March 2015 at a number of venues throughout the town. Â The full listÂ of films can be found here www.stroudfilmfestival.co.uk

Our own programme of personal documentaries, LIFE’S LEGACY will be on Saturday 14th March. Â  Â The evening will start at 7.00 pm with an opportunity to join us for a drink and tapas at Â the Star Anise. Â The screening of the three films will start at 8.00 in the Open House Cinema justÂ across the courtyard from the Star Anise and will be followed by an 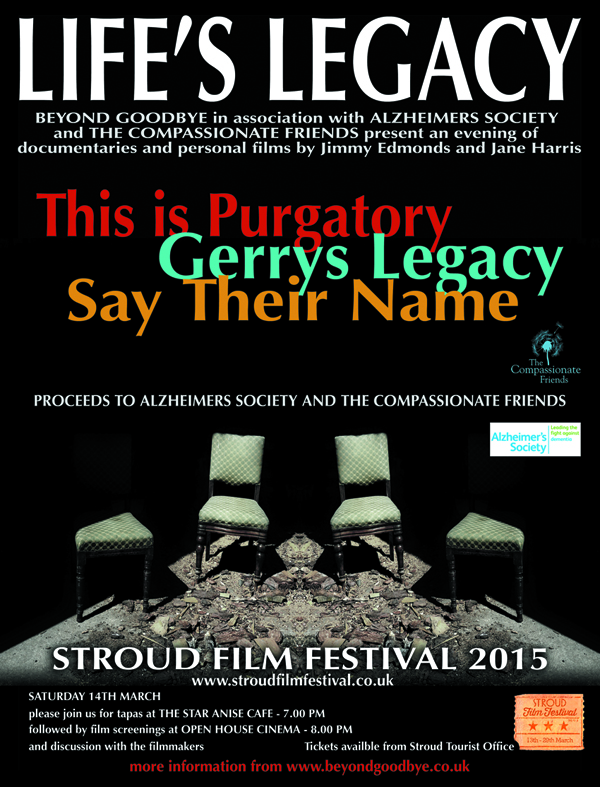 open discussion on the themes they raise – life, love, loss (and laughter). Â  Â  Following on from Josh’s death and ourÂ attempts to come to terms with his absence, we are really presenting these films as a reflection of our own engagement with ideas about end of life care, the role thatÂ our mortalityÂ plays in our society, and the fears associated with death and bereavement. Â  Â In that sense, they are all very personal films but films that we hope have a wider resonance for anyone who has been bereaved or is caring for an elderly relative. Â  Â But more than that, they are part of a growing conversation about death and dying that doesn’t have to be morbid or depressing.

Death is part of life and by averting our gaze we deny ourselves the chance to really live it.”Â (Nicola Dela-Croix) 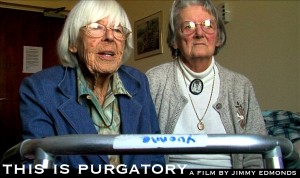 This is PurgatoryÂ (or what do you think happens when you die?)Â (2009 – 30 mins)Â was made by Jimmy as part of the Random Stroud project, a year and a half before Josh died. Â  It’s a light hearted take on the life hereafter made at a time when we had little idea of what that might mean for us in a world we would inhabit as bereaved parents.

“Quirky, thoughtful and moving … Â a lively combination of of humour and deep humanity” Â Pip Heywood – film maker Â The Eye of the Hare 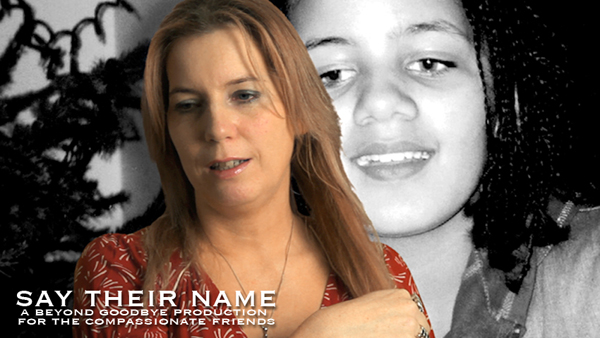 Say Their Name (2013 – 17 mins) Â is the only film available in the UK made by and for bereaved parents. Â  Â Soon after Josh died, we were approached by the bereavement charity The Compassionate Friends to make a film which would give comfort to the newly bereaved and understanding to their friends and family. Â This is the result. 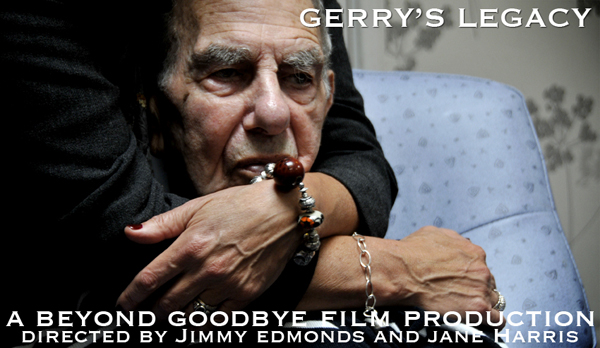 Gerry’s Legacy (2015 – 45 mins)Â Six years in the making this is the story of Jane’s attempts to help her father who at the age of 93 was diagnosed with vascular dementia and spent the reminder of his life inÂ what was signposted as a specialist dementia unitÂ but was in reality a locked psychiatric ward. Â  Â With over 100 hours of footage, the film project originally had the working title of The Waiting Room but was eventually produced for Alzheimers Society as a series of training modules to encourage a more person centered care. We have now shaped it intoÂ anÂ intimate yet powerful observationÂ of some of the fears and anxieties as well asÂ theÂ hopes provokedÂ by dementiaÂ both for the personÂ and for the family.

“Gerry’s LegacyÂ illustrates the frustrating experiences of people living with dementia, and the continual confrontation with a system of treatment that can …Â fail utterly to make sense of the personâ€™s individual life or experience.” Dr Shibley Rahman Â author ‘Living better with dementia’: a global perspective (to be published June 2015)

The Stroud Film Festival – for full programme of films

NCPC/Dying Matters – for review of Say Their Name