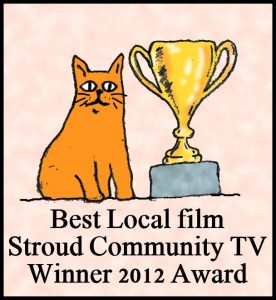 We are very honoured to be recognised in this way if only because it helps us (as a society) to talk about stuff that most people will want to avoid. Â  At the time of Josh’s death and on the day of his funeral I really don’t think we had any idea of of the impact making a film about the event would have on us and on the people who have watched it. Â  Â But in documenting our farewell to Joshua, Beyond Goodbye has shown how important it is to take charge (as best one can) of the funeral arrangements for a loved one.

This idea of “reclaiming the farewell” as James Showers puts it, is becoming quite common place now and we can see that a film about one such funeral is quite fitting. Â  For too long the funeral industry has had too much control over what makes a good funeral and in the process have obscured what the ritual is really all about. Â The funeral doesn’t need to be the final act or a way of achieving closure after someone dies – on the contrary, if we see it as the first step of a new journey – a journey into and through grief, then the funeral becomes a much more meaningful rite of passage and one that will aid us immensely through very difficult moments in the rest of our lives. Â  At least that’s what we’ve found and we are very pleased that our film has found wider audiences, that others have been similarly moved.

Some quotes from the organisers

Andy Freedman, Head of Cirencester College Media Department and a judge in this category said of the film:Â â€œProfoundly moving; unique, original and a significant piece of work. A range of skillful techniques used to create a extraordinarily affectingÂ  film.â€

David Pearson of award-winning Arturi films and a judge for SCTV, said:Â â€œA brave and compelling account of something most people avoid discussing. It is everything good documentaries should be: revealing, effecting, moving and making the viewer see something from a different perspective.â€

Thanks to Philip Booth of SCTV who helped organise the awards, online casino which I’m sure are set to become established as significant date in the Stroud arts calendar. Â  Â SCTV already has links to over 700 locally made films which is an amazing tribute to the talent that exists here in the Five Valleys. Apollo Cinema next year Philip?
Our thanks also go to Simon Ffrench on camera, Marc Hatch for sound, and photography by Fred Chance and Briony Campbell, but for whom we wouldn’t have such a splendid record of Josh’s funeral.
Jimmy (Feb 2013)
Check these links outÂ
for the SCTV AWARDS page
for the full version of BEYOND GOODBYE
for two other excellent short films from the awards that have attracted our attention
“1 in 10” by Nick Baker for best campaign film – which highlights the role of unpaid carers
“Letting Go” by Sean Gleeson – runner up for best local film